Researchers have discovered microbial fossils in 3.7-billion-year-old rock in Greenland, the oldest-known fossils to date.

The discovery of the fossilised bacterial communities, known as stromatolites, could be the first clear biological evidence of the earliest known life on Earth, according to a paper published today in scientific journal Nature.

Before this find, the earliest accepted evidence for life were 3.48 billion-year-old fossil stromatolites from the Pilbara region in Western Australia. 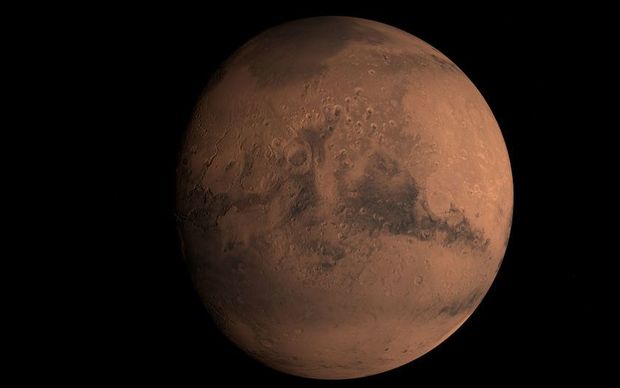 The discovery could also help guide the search for evidence of past life on Mars. Photo: 123RF

Lead author of the latest study Allen Nutman of Australia's University of Wollongong has been investigating ancient rock formations in the Isua Supercrustal Belt in south-west Greenland for more than 30 years.

The rocks were known to contain a unique carbon signature, but until now it was unclear whether the signature had been created by ancient life forms or changes in the rock caused by heat and pressure.

During one of their visits to the area, the team found a new outcrop had been exposed by increased melting of the summer snow.

"There were some new outcrops that, as far as I can see from historical aerial photographs, have not been exposed in at least the last 40 years or so," said Prof Nutman.

Those rocks bore unusual features that the group instantly recognised.

Within those bumps and hummocks, they could also see the fine layering that is distinctive of stromatolites, where calcified layers are gradually built up by bacteria over hundreds and even thousands of years.

The team used sophisticated techniques to carefully date the layers of rocks above and below the fossils.

The analysis placed the stromatolites between 3.71 and 3.695 billion years of age.

"So we've really pinned it down," Prof Nutman said.

Evidence from the "molecular clock" - the mutation rate of genetic material - has long suggested that life first emerged on Earth around 4 billion years ago.

As the product of bacterial communities, stromatolites suggest some degree of sophistication already existed at 3.7 billion years ago, Professor Nutman said.

The discovery could also help guide the search for evidence of past life on Mars, he added.

Commenting on the finding, biogeochemist Dr David Wacey, Future Fellow at the University of Western Australia, said the find would undoubtedly have paleobiologists "queuing up waiting for more snow to melt and reveal additional new outcrops in this region".

Dr Wacey said the discovery was exciting, but not necessarily surprising, given that microfossils and stromatolite fossils dated to around 3.48 billion years ago had previously been found.

Dr Wacey stressed the Isua fossils would need to undergo the same rigorous scrutiny as previous ancient microbial fossils had been before this could be considered 100 per cent proof of life 3.7 billion years ago. But at this stage, he said, there were no other competitors for "world's oldest fossil".