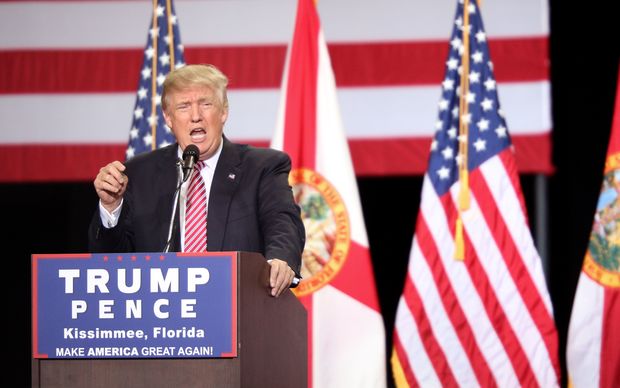 Mr Trump's vow to toughen immigration policy has been at the centre of his campaign and he has promised to carry out mass deportations and build a wall on the US-Mexico border.

His new campaign manager, Kellyanne Conway, said Mr Trump was committed to a fair and humane approach to those living in the country illegally.

Responding to reports about what was said in a meeting Mr Trump had with Hispanic community leaders during the weekend, she told CNN's Dana Bash the mass deportation plan could be on hold.

"As the weeks unfold he will lay out the specifics of that plan that he will implement as president of the United States," she said.

Pressed on whether Mr Trump's plans would include a "deportation force" that the candidate previously pledged to set up, she said that was still to be determined.

Republican Senator Jeff Sessions, a close ally of Mr Trump, told CBS that the candidate was still working through his plans for deportations should he win the White House.

"He's wrestling with how to do that. People that are here unlawfully, came into the country against our laws, are subject to being removed. That's just plain fact," the Alabama lawmaker said.

Mr Trump has also been rebuked by opponents for his proposal to impose a temporary "total and complete shutdown" of Muslims seeking to enter the country, later rolled back to focus on countries with "a proven history of terrorism".

Ms Conway, who had been a senior adviser, was promoted to campaign manager and Stephen Bannon, head of the Breitbart News website, was hired as campaign chief executive.

The Trump campaign said on Friday that campaign chairman Paul Manafort was resigning.