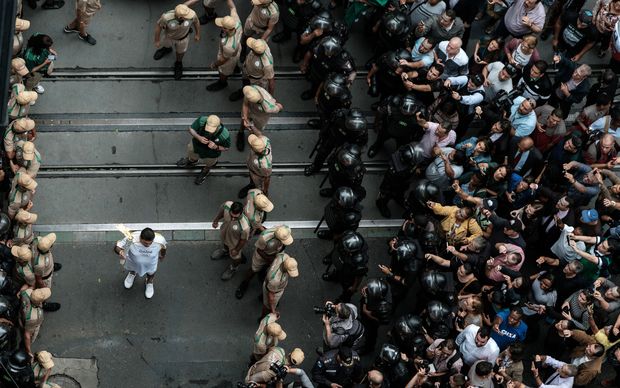 The torch ceremony would be met with protest in neighboring towns, where police clashed with demonstrators ahead of the torch's arrival. Photo: AFP

Olympic Brazilian sailors earlier delivered the torch to the host city's mayor after crossing Guanabara Bay near the end of a 20,000km journey through one of the world's largest and most diverse countries.

The flame arrived at Brazilian soil at 9.15am local time, while just kilometres away 450 heavily armed police battled drug traffickers to carry out dozens of arrest orders in the Alemao slum, an area near the international airport and main road to Olympic venues.

Armed soldiers stood patrol on highways and on many corners throughout the iconic beach city in Brazil's largest security operation ever. Some 85,000 police, soldiers and security personnel were expected to be deployed in Rio, more than double the amount in London in 2012, to deter both violent street crime and the threat of attacks by extremists.

Police dispersed them with pepper spray and rubber bullets. A video of the incident spurred social media criticism of the police and amplified complaints that the Games ignored the poor. 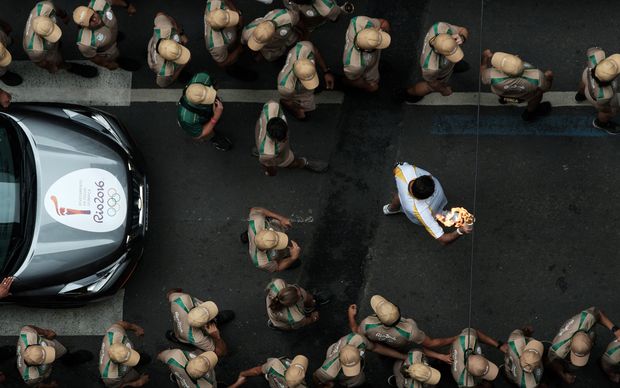 A representative for the local organising committee called the incident isolated and said the protesters had held up the torch but its route was not changed.

The clash, which came a day after anti-torch protests in nearby towns and amid several days of gang violence in northern Brazil, underscored social tension in the massive country.

The world's largest sporting event comes to Brazil at a challenging time, in the midst of the country's worst recession in at least a quarter century and an impeachment trial of a suspended president.

Brazil won the bid to host the Games in 2009, when the economy had been booming.

"The Olympics is a waste of time. The Games did not bring any benefits to Rio de Janeiro," said waiter Adriano Souza, 25, lamenting the lack of public transport.

After picking up the torch at a local naval academy, a grinning Mr Paes took it on its first laps through the streets of downtown Rio, known locally as "the marvellous city."

A few protesters cropped up in the mostly celebratory crowd, which cheered to the pulse of drums and samba music. 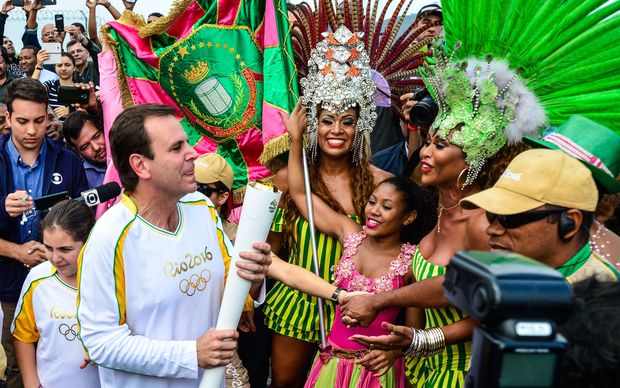 The mayor of Rio de Janeiro, Eduardo Paes carries the Olympic torch on its arrival in the city on 3 August. Photo: AFP

In addition to balking at the $US12 billion price tag, protesters were calling for more accountability from elected officials after a massive corruption scandal focused on the state oil company ensnared dozens of high-level politicians.

The economic malaise might have contributed to a larger excess supply of tickets before the Games' start than in London.

The Rio Organising Committee said 1.3 million tickets remained unsold on Wednesday, though nearly half those tickets were for soccer matches held in other cities.

The symbol of the Olympic Games, the torch, would visit more towns and return to the city centre on Thursday ahead of Friday's opening ceremony in the famed Maracan+ stadium, site of the Fifa World Cup final in 2014.

Some cariocas, as residents of Rio are known, said they were eager to show the world their city is ready for the international spotlight and pleased they had largely delivered venues on time.

While the torch's tour through 300 cities had generally been smooth, it did spur an international outcry when authorities had to shoot a jaguar after the animal escaped from its handlers at a ceremony in the Amazon city of Manaus.

The name of the final torch bearer is a closely guarded secret, but soccer legend Pele said on Tuesday he been invited to light the Olympic cauldron on Friday and was checking availability with his sponsors.