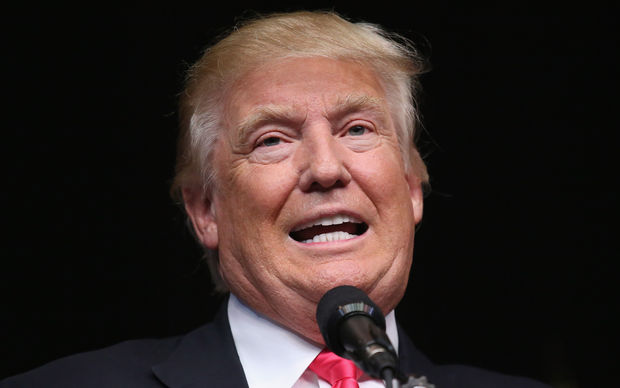 He told Fox News the Democratic Party was using the row over his remarks to deflect from bigger issues.

His remarks on Wednesday were regarding 30,000 emails Mrs Clinton did not hand over as part of an inquiry into a private email server.

Russia has accused the candidates of stirring up anti-Russian sentiment.

His campaign has maintained pressure on Mrs Clinton over an FBI investigation into her use of a private email server while she was secretary of state.

During the investigation, Mrs Clinton did not hand over 30,000 emails as they contained private details.

On Wednesday, Mr Trump told a news conference: "Russia, if you're listening, I hope you're able to find the 30,000 emails that are missing. I think you'll be rewarded mightily by our press."

He later wrote on Twitter that if anyone had the emails, they should hand them over to the FBI.

"This has gone from being a matter of curiosity, and a matter of politics, to being a national security issue," he said on Wednesday.

The row came as Russia was accused of hacking emails from the Democratic National Committee (DNC) for Mr Trump's benefit. Both Russia and Mr Trump denied the allegation.

Those emails were leaked to the Wikileaks organisation and published last Friday.

In his interview with Fox, Mr Trump said: "The real problem is what was said on those emails from the Democratic National Committee.

"What they said on those emails is a disgrace and they're just trying to deflect from that."

The emails showed DNC officials, who are supposed to remain neutral, had favoured Mrs Clinton and derided her Democratic rival Bernie Sanders.

President Barack Obama has refused to rule out Russian involvement in the leak, adding: "What we do know is that the Russians hack our systems. Not just government systems, but private systems."

Kremlin spokesman Dmitry Peskov said the hacking allegations were a "vivid example of the use of anti-Russian sentiment for electoral purposes in the United States".

"It is so absurd it borders on total stupidity," he said.

"As regards these [DNC email] batches, that is not our headache. We never poke our noses into others' affairs and we really don't like it when people try to poke their nose into ours."

He added: "The Americans needs to get to the bottom of what these emails are themselves and find out what it's all about."