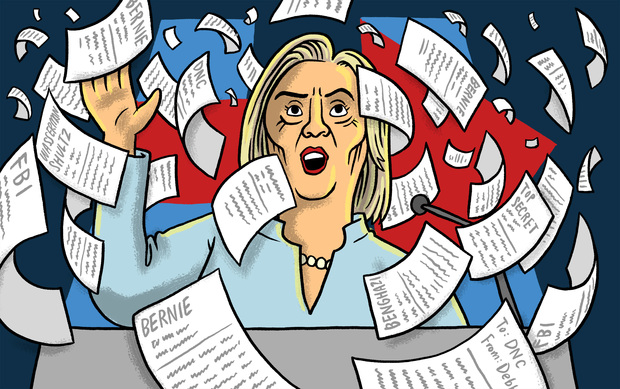 When does the Democrat Circus begin?

It's already under way. The Democratic National Convention runs this week in Philadelphia from Tuesday to Friday (NZ time). Bernie Sanders and Michelle Obama have spoken already. Today, Bill Clinton unleashes the inspirational drawl, Thursday sees running mate Tim Kaine introduce himself and President Barack Obama attempt to big up his would-be successor without oratorically leaving her for dust. On Friday Chelsea Clinton will introduce her mother, who will be followed by everybody's favourite convention tradition, eleventy-billion balloons raining from the rafters.

Why was there no animated question-and-answer based column on the Republican National Convention?

We've already done quite a bit on Donald Trump.

Is it because Radio New Zealand is stuck in an elitist bubble?

People can always leave their thoughts in the comments.

Didn't RNZ turn off the comments?

What is the task for Team Hillary this week?

If there were any complacency in the camp that will have been steamrolled by polls showing Trump leapfrogging Clinton following last week's Republican carnival. The core challenge for the presumptive nominee and her cohort is to make headway - even a little bit - on the trust issue. Both Clinton and Trump have been found in recent polling to be regarded as untrustworthy by about seven out of 10 Americans. There will be concerted efforts to pitch Clinton as a candidate for a united and positive America in contrast to Trump's divisiveness and negativity; Clinton's experience versus Trump's political naivety.

The big problem, of course, is the email thing.

There's those, sure, but what has threatened to derail the convention is the cache of private Democratic National Committee emails published by Wikileaks.

What did they contain?

Most damagingly, they suggested that party organisers breached their pledge of neutrality and actively backed Clinton over her main challenger, the socialist Senator Bernie Sanders. That has fuelled perceptions that the primary contest was "rigged" in her favour, which not only inflames the so-called "Bernie or Bust" hardcore tribe, many of whom began day one of the jamboree by jeering every mention of Clinton's name, but feeds into the characterisation of Clinton as part of a political establishment that is itself rigged. It makes it trickier, too, for the Democrats to present their convention as coherent and unified in contrast to the Republicans' clustermuck.

Was there a scapegoat?

DNC Chairwoman Debbie Wasserman Schultz was defenestrated faster than you could say "Is Donald Trump a Manchurian Candidate from Moscow"?

Is the what candidate from what?

There have been suggestions - and there is some intriguing evidence, albeit not conclusive - that the Democrats' email was hacked by the Kremlin and fed to Wikileaks. Some commentators, including the New York Times' Paul Krugman, have creatively wondered in print whether Trump, who seems to like Vladimir Putin heaps, could be a Moscow plant, a bit like the one from the film The Manchurian Candidate.

It was a novel first.

How has Sanders responded to the leaks?

He said they confirmed his belief that the party had behaved inappropriately during the primary, but at the same time urged Sandersistas not to heckle Clinton. In an email to supporters he wrote: "I would ask you as a personal courtesy to me to not engage in any kind of protest on the floor ... that's what the corporate media wants. That's what Donald Trump wants."

And in his speech?

In his opening day address, Sanders said, "Any objective observer will conclude that - based on her ideas and her leadership - Hillary Clinton must become the next president of the United States." He didn't exactly lift the roof, though; that was left to Michelle Obama, who has achieved the unlikely double of starring as a speech-maker at both the Democrat and Republican conventions.

Have the Democrats got through the email turbulence now?

Some say there is more to come.

Kim Dotcom tweeted this: "The @Wikileaks nuke to end @HillaryClinton is yet to come. @realDonaldTrump might fall in love with Internet freedom & transparency :) #Huge"

Is that the same Kim Dotcom who promised a bombshell at the last election in New Zealand that would destroy John Key's political career?

Will the convention be star studded?

Considerably more celeb-heavy than the Republicans'.

They did have Scott Baio.

They did, and everyone loves Chachi, but the Democrats have a bunch of the usual namby pamby Hollywood hangers-on, as well as Lady Gaga and Snoop Dog.

Expect, too, a parade of "Ordinary Americans" to testify that Hillary Clinton is totally ordinary, and not a super-pragmatic establishment career politician.

How is Clinton's speech likely to go, in 50 words?

That sounds familiar. Isn't that from Barack Obama's convention speech in 2008?

So it is. Easy mistake to make.

*This column is part of a weekly series, published every Wednesday, by graphic artist Toby Morris and journalist Toby Manhire.