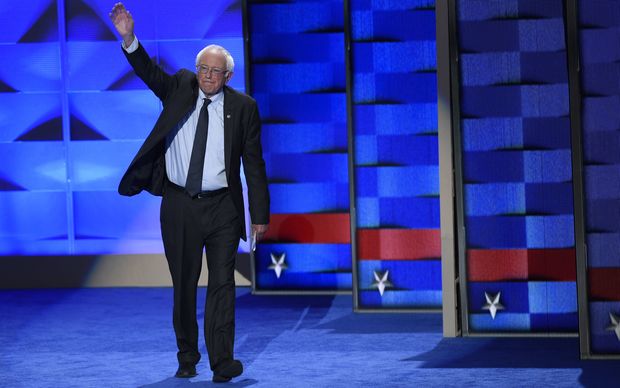 The Vermont senator received a three-minute standing ovation when he took the stage at the Democratic National Convention in Philadelphia.

"Hillary Clinton must become the next president of the United States," he said as the crowd erupted in cheers.

Earlier in the evening, his fans had booed any mention of Mrs Clinton, who will accept the party's presidential nomination on Thursday.

And as he implored them to back his Democratic rival in the final major speech of the night, they held aloft their blue "Bernie" signs and chanted his name.

Some supporters broke into tears while others wore duct tape emblazoned with the words "silenced" or "silenced by the DNC" over their mouths.

"While Donald Trump is busy insulting one group after another, Hillary Clinton understands that our diversity is one of our greatest strengths," Mr Sanders continued.

"If you don't believe this election is important, if you think you can sit it out, take a moment to think about the Supreme Court justices that Donald Trump would nominate and what that would mean to civil liberties, equal rights and the future of our country," he said. 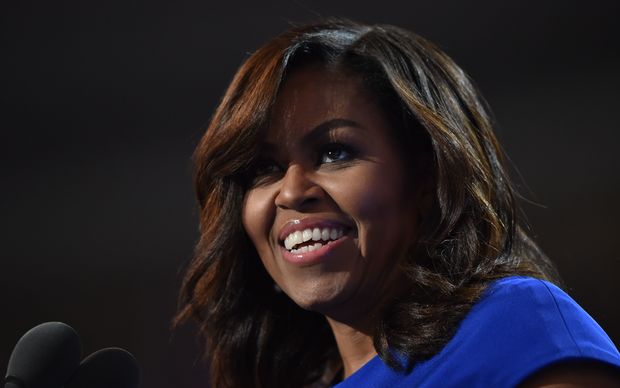 Earlier in the day, First Lady Michelle Obama was given a rapturous reception after delivering a moving speech with several references to Mr Trump

"When someone is cruel or acts like a bully, we don't stoop to their level,' she said.

Mr Sanders sent an email saying the credibility of the progressive movement would be damaged by "booing, turning of backs, walking out or other similar displays" of protests.

Wikileaks released emails last week that suggested the DNC was biased against Mr Sanders when he ran against Mrs Clinton in the hard-fought primary contest.

The FBI has confirmed that it is investigating the leak.

DNC chairwoman Debbie Wasserman Schultz resigned on Sunday as pressure built on the party to address the scandal. The outgoing chair said on Monday she would no longer be speaking at the opening of the convention.

Democratic party bosses later issued an apology to Mr Sanders for what they said were "inexcusable" emails.

But Mr Sanders refused to let the email scandal eclipse his message to his supporters.

"Hillary Clinton will make an outstanding president and I am proud to stand with her here tonight," he said before he left the stage.

About 5000 party delegates are among the 50,000 people expected to attend the four-day convention, which will end on Thursday with Mrs Clinton formally accepting the nomination for president.