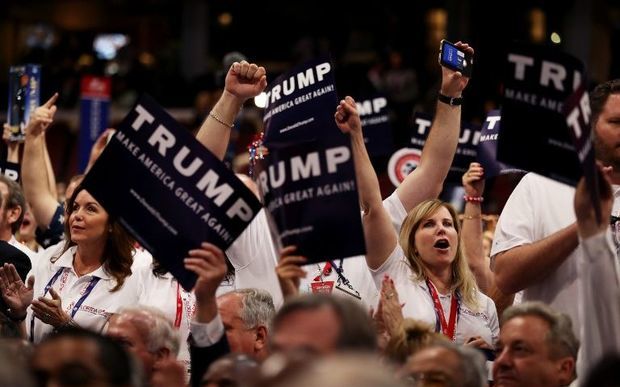 In his new book Listen, Liberal: or What Ever Happened to the Party of the People? New York Times best-selling author Thomas Frank argues America's left has abandoned its working class roots to pursue a new class of supporter - the elite professional.

He argues the Democratic Party has failed to do anything meaningful about income inequality over the last few decades. And with no one championing the economic needs of ordinary workers this leaves rich pickings for Donald Trump.

Mr Frank wrote the 2009 book What's the Matter with Kansas? and is a columnist for Harper's magazine and The Wall Street Journal.

What do you make of this takeover, effectively, of the establishment Republican Party by Donald Trump?

Well, it’s a bumper crop of crazy this year. The stories of the two parties complement each other, that as it becomes more and more obvious that the Democratic party is appealing to an affluent white-collar group that the Republican Party (which is traditionally the more conservative party here in the United States) is making more and more of an appeal to disaffected and really angry working class voters. The Republican Party as we know it in this country is coming apart in front of our eyes here at the convention in Cleveland.

Has there been a rise of a “professional class” in politics? Has a "professionalising" of politics become part of the disconnect between two parties in the states and many voters?

In the sense that the campaigns are run by professionals? Yes.

Washington lobbyists, even those who are likely to make their way through to election in Senate and Congress … in some ways there is a political class. Has it always been like this in history or was there a time when there was more accessibility and more connection?

This is a problem that goes back many, many generations. But yes, it is worse today than ever and it is much more noticeable. The candidates talk [about it] all the time.

Washington DC is today the richest city in America, it was not even touched by the recession that started in the US and spread throughout the whole world. There was no problem in Washington DC, real estate values continued to climb, it’s a lovely place. The political class, they have their own newspapers and they do often refer to themselves as the political class.

I love this phrase – “the influence class”, meaning the hot lobbyists who are so connected to everybody and their friends. There are magazines that detail the comings and goings and what bars they go to and the kind of fun that they have and how they spend their money.

It is loathsome. There is no getting around it. It is deeply, deeply disgusting and everybody is angry about it. It’s absolutely a part of what is going on right now.

Why is it that a billionaire property developer who has had a television show, makes polarising statements, does not have political experience … why is it that Trump is pretty close to neck and neck with Hilary Clinton in the polls as of July?

That’s the question. Think of Hilary Clinton. You said that it is a year of anger for America and that is true for every candidate except Hilary Clinton. She is openly running as a candidate of complacency, of propriety, of finger-wagging, scolding for people who have bad manners. That’s who she is. So Trump’s slogan is ‘Make America great again’, and Hilary’s is that America has always been great. She’s saying that the economy is great, there’s nothing to complain about, Barack Obama has been a great president and every indication says that she’s probably going to be elected this November.

But the bigger answer to your question has to go back to what happened in this country eight years ago. When the financial crisis happened, the economy was in a tailspin – the economy of the entire world, thanks to what was happening in this country – this bright, young idealistic man Barack Obama was running for president. He seemed like the Franklin Roosevelt of our time. He was exactly what the situation called for and everything since then is a story of dashed hopes and crushed idealism. Disappointment on a massive scale that he didn’t do what needed to be done with the banks, with the economy…

If you look at where we are now, for most people the recovery never even happened. They think the recession is still going on, but for the upper class, white-collar professionals who make up the most important constituency in the Democratic Party, these are really good times. They honestly don’t understand why the rest of the country is so upset.

That’s a really good question. In America we don’t debate that question at all.

I’ve got a PhD. I went to school for 25 years, I got a PhD in American history, wanted to become a professor of American history, only to discover that the American academic labour market had been completely casualised and I was never going to get a tenure job in American history. I was going to have to work for the rest of my life, with wages that are so unbelievably low that if I told you about them, you wouldn’t believe me. It’s insane.

Having a degree is zero protection. Going to school for all of those zeros was of zero use to me. So you know what I did instead? I became a journalist. And now journalism has utterly collapsed. If I told you how much money I have been offered to be a columnist, again, you would not believe it. It’s a disaster.

The question is how do you deal with these demands, and the way we have done it so far in America is to do nothing.

One way to do it would be to say, 'look at who is being harmed by these trade deals that we’re signing onto here in America and look at whose industries are being ruined and whose livelihoods are being ruined and let’s help them out'. But we never do that. Instead we scold those people and call them stupid. We make no provision for people whose livelihoods have been ruined.

Automation and mass unemployment is coming and unless we figure out that we have to talk about these problems in a different way, it is going to be unemployment for millions of people and too bad, case closed! That’s how we deal with it in America.