President Tayyip Erdogan tightened his grip on Turkey on Saturday, ordering the closure of thousands of private schools, charities and other institutions in his first decree since imposing a state of emergency after the failed military coup.

He has also dismissed the elite presidential guard after nearly 300 of its members were detained. 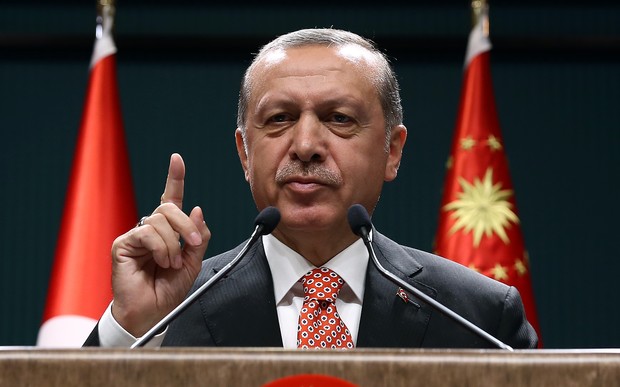 A restructuring of Turkey's once untouchable military also drew closer, with a planned meeting between Mr Erdogan and the already purged top brass brought forward by several days.

The schools and other institutions are suspected by Turkish authorities of having links to Mr Gulen, who has many followers in Turkey. Mr Gulen denies any involvement in the coup attempt in which at least 246 people were killed.

His nephew, Muhammed Sait Gulen, was detained in the northeastern city of Erzurum and will be brought to the capital Ankara for questioning, Anadolu reported. Among possible charges that could be brought against him is membership of a terrorist organization, the agency said.

It is the first time a relative of Mr Gulen's has been reported detained since the failed coup.

Turkey has also captured one of his key aides, a presidency official said. Halis Hanci, described as the cleric's right-hand man, apparently entered Turkey two days before the abortive coup.

Hasan Karakus, the pilot who bombed the special forces command in Ankara and killed 42 police officers, was also caught in Turkey, said the official.

Critics of Mr Erdogan fear he is using the abortive coup to wage an indiscriminate crackdown on dissent. The foundations targeted include, for example, the Association of Judges and Prosecutors (YARSAV), a secular group that criticised a recent judicial law drafted by Mr Erdogan's Islamist-rooted AK Party.

Banners were hung on road bridges, subways and advertising boards around Istanbul with the words "Hakimiyet Milletindir" (The People Rule). Public buses and some private cars were adorned with red Turkish flags.

Public transport in Istanbul has been free since Mr Erdogan called people to the streets and will continue to be so until Sunday, when the main opposition CHP is staging a "democracy rally" in Istanbul's central Taksim square, to which it has also invited supporters of the ruling AK Party, to condemn the coup attempt. 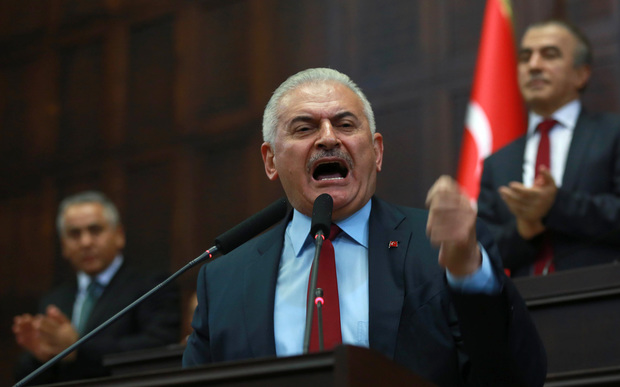 Turkey does not plan to extend emergency rule beyond a period of three months following the failed coup, but will do so if necessary, Prime Minister Binali Yildirim said.

"Our goal is that it shouldn't be extended, but if the need arises it may of course be extended," he said in an interview with the ATV television station.

Mr Yildirim said only a few people who took part in the coup attempt remain at large - a group of around 15 who attacked a hotel Mr Erdogan was staying at in the resort of Marmaris and some who went to Greece.

Turkey plans to dismantle the special presidential guard, he added.

"There will no longer be a presidential guard, there is no purpose, there is no need," Mr Yildirim told the A Haber TV channel.

The presidential guard numbers up to 2,500 soldiers but at least 283 were detained after the uprising.

In his decree, published by the Anadolu state news agency, Mr Erdogan also extended to a maximum of 30 days from four days the period in which some suspects can be detained. It said this would facilitate a full investigation into the coup attempt.

Mr Erdogan, who narrowly escaped capture and possible death during the coup attempt, said in an interview on Thursday that he would restructure the armed forces and bring in "fresh blood". 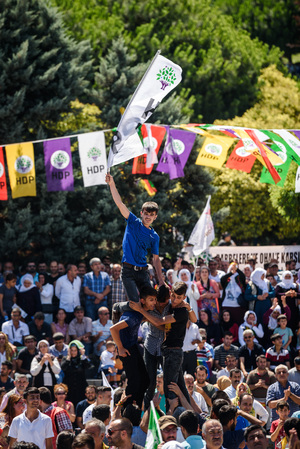 Pro Kurdish supporters gather during a rally against the military coup and the state of emergency. Photo: AFP

Turkey's Supreme Military Council (YAS) will meet under his supervision on 28 July, a few days earlier than originally planned, private broadcaster NTV reported, a sign that the president wants to act fast to ensure the armed forces are fully under the government's control.

Reinforcing that message, the YAS meeting - which usually takes place every August - will be held this time in the presidential palace, not as is customary at the headquarters of the military General Staff.

Mr Erdogan, a popular but polarising figure who has dominated Turkish politics since 2003, declared the state of emergency late on Wednesday, saying it would enable authorities to swiftly and effectively root out supporters of the coup.

The emergency allows Mr Erdogan and the AK Party government, who are mildly Islamist, to pass laws without first having to win parliamentary support and also to curb or suspend rights and freedoms as they deem necessary.

Turkish authorities have already launched a series of mass purges of the armed forces, police, judiciary and education system, targeting followers of Mr Gulen, who operates an extensive network of schools and charitable foundations.

The first decree authorises the closure of 1043 private schools, 1229 charities and foundations, 19 trade unions, 15 universities and 35 medical institutions over suspected links to the Gulen movement, the Anadolu agency said.

Parliament must still approve the decree but requires only a simply majority, which the government has.

In an address to parliament late on Friday, Mr Erdogan vowed to bring to justice supporters of the Gulenist "terrorist" movement and he urged Turks to continue attending rallies in major cities in support of democracy and against the coup plotters.

More rallies were planned over the weekend in many towns and cities. In Istanbul, Turkey's commercial capital, authorities have allowed people to travel for free on the metro system so they can more easily attend the rallies. Video screens on trains show pictures of citizens, or "martyrs", killed in the violence.

Cars and mini-buses honking their horns drive around the streets until late in the night carrying flag-waving supporters of Mr Erdogan shouting patriotic or religious slogans.

On Friday evening Mr Erdogan held his first meeting since the coup with the head of the national intelligence agency, Hakan Fidan, after complaining of significant intelligence shortcomings ahead of the coup attempt. Despite media speculation, however, he did not sack Mr Fidan.

Mr Cavusoglu said the link between soldiers involved in the failed coup and Mr Gulen's extensive network of followers was "very clear", adding that Turkey would do all it could "politically and legally" to secure his extradition.

The United States has said Ankara needs to provide clear evidence of Mr Gulen's involvement before it can agree to extradite him. Lawyers say that process could take many years.

After the coup, Western countries pledged support for democracy in Turkey, a NATO ally and an important partner in the fight against Islamic State, but have also expressed concern over the scale of the subsequent purges of state institutions.

Turkish authorities have suspended, detained or placed under investigation more than 60,000 soldiers, police, judges, teachers, civil servants and others in the past week.

In Ankara, the minister for European Union affairs chided Western countries for not sending any representatives to demonstrate their solidarity with Turks since the coup attempt.

"We are very surprised that our allies have not come to Turkey to visit even after one week has passed," Omer Celik told reporters.