A three-month state of emergency has been declared by Turkey's President, following the weekend coup attempt.

After a cabinet meeting to discuss plans to stablilise the country, President Recip Tayyip Erdogan gave a live television address, where he said he would work as President and Commander in Chief with armed forces to cleanse a 'virus' from the military. 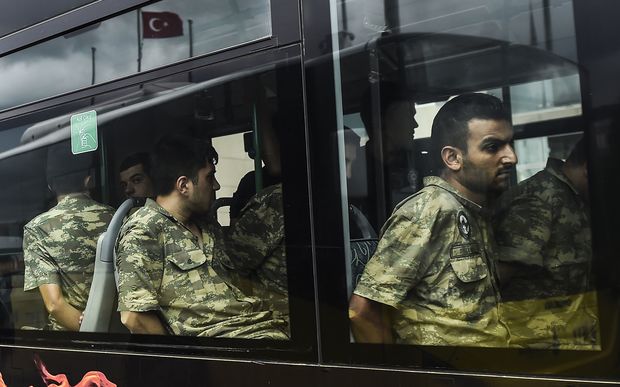 Detained Turkish soldiers who allegedly took part in a military coup arrive in a bus at the courthouse in Istanbul on 20 July. Photo: AFP

The state of emergency will allow the President and cabinet to bypass parliament in passing new laws and to limit or suspend rights and freedoms as they deem necessary.

Earlier President Erdogan said he would approve a parliamentary measure to reinstate the death penalty even if it endangered Turkey's bid to join the European Union.

"The world is not simply the European Union. Do you have capital punishment in the US, Russia, China and in many other countries? Yes," he told broadcaster Al-Jazeera. 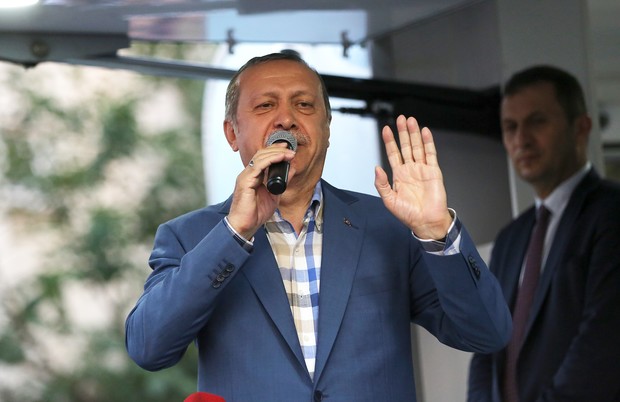 Meanwhile, formal charges have been laid against 99 generals and admirals in connection with the coup attempt - just under a third of the country's 356 top military officers.

Authorities have banned all academics from travelling abroad, as the purge of state employees suspected of being connected to the failed coup continues.

More than 50,000 people have been rounded up, sacked or suspended.

So far about 1577 university deans have been asked to resign, in addition to 21,000 teachers and 15,000 education ministry officials.

They are suspected of having links to the alleged mastermind of the coup, US-based cleric Fethullah Gulen - who denies any involvement.

As soon as it was obvious the coup had failed, the purges began - first with the security forces, then spreading to Turkey's entire civilian infrastructure.

Human rights group Amnesty International has warned the purges are being extended to censor media outlets and journalists, including those critical of government policy.

"We are witnessing a crackdown of exceptional proportions in Turkey at the moment.

"While it is understandable, and legitimate, that the government wishes to investigate and punish those responsible for this bloody coup attempt, they must abide by the rule of law and respect freedom of expression," Amnesty's Turkey researcher Andrew Gardner said.

Turkey has now extended the clear-out to the education sector in its desire to root out Gulen supporters.

The Higher Education Council has asked university rectors to "urgently examine the situation of all academic and administrative personnel" linked to what it calls the Fethullah Terrorist Organisation (Feto) and report back by 5 August.

It has also told universities that academics who are already abroad on work or study missions should return home "within the shortest possible time".

A government official told the Reuters news agency that the ban on academics travelling abroad was a temporary measure implemented to stop alleged coup plotters in universities from fleeing abroad.

Turkey is pressing the US to extradite Mr Gulen and the issue was raised during a phone call between US President Barack Obama and President Erdogan on Tuesday, the White House said.

Spokesman Josh Earnest said a decision on whether or not to extradite would be made under a treaty between the two countries. 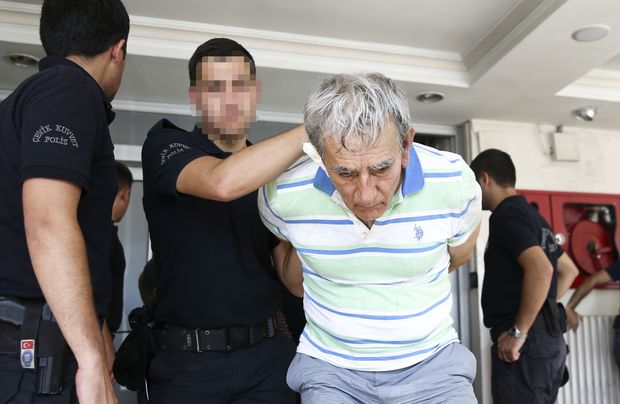 There are conflicting reports about whether a former Turkish air force commander has confessed to planning the coup attempt.

The state-run Anadolu news agency quoted General Akin Ozturk as telling interrogators he had "acted with intention to stage a coup".

Photographs of the general published by Anadolu appear to show several injuries to his head and upper body.

But two private broadcasters said the General had denied playing a role.

In a separate development Turkey has barred access to the WikiLeaks website soon after it posted about 300,000 emails sent by President Erdogan's AK Party dating from 2000 to early July 2016.

Wikileaks said that although the documents were obtained before the attempted coup, the date of their publication was brought forward "in response to the government's post-coup purges".

The source of the emails was not linked to the coup plotters or to a rival political party or country, WikiLeaks said.

Turkey's military also announced on Wednesday that it had resumed cross-border strikes against Kurdish rebel targets in northern Iraq, killing about 20 alleged militants. They were the first since the attempted coup. 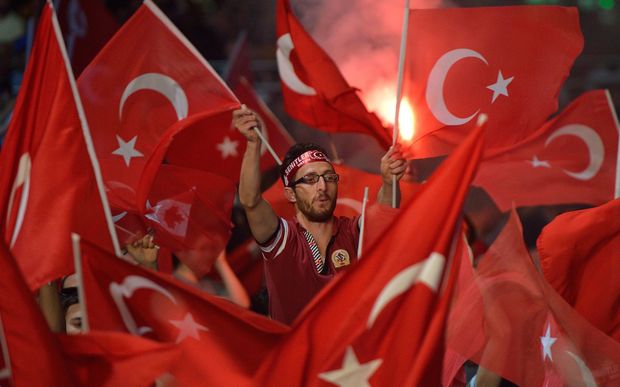 A man waves a Turkish flags during a meeting in support of the Turkish president on Taksim Square on 19 July. Photo: AFP

Dutch, German and Canadian foreign ministers have expressed concern about the scale of the crackdown by Turkish authorities and called on Turkey to respect the rule of law.

Dutch Foreign Minister, Bert Koenders told a news conference in Washington the Netherlands wanted to send a strong signal on the need to respect the rule of law.

German Foreign Minister Frank-Walter Steinmeier said his government viewed with concern reports of thousands of people arrested in Turkey and some prevented from leaving the country.

He said Germany was also concerned that broadcast stations were being closed, and having their licenses withdrawn.

The foreign ministers spoke on the sidelines of an Iraq donor conference in the American capital.