Australian Election - Australia's political parties have begun horsetrading in the wake of the weekend's knife-edge result, as the prospect of a hung parliament looms.

Liberal Party leader Malcolm Turnbull insists he will be able to secure enough seats to form a majority government by the end of the week. Mr Turnbull said he had already spoken to the smaller parties - or crossbench - that may ultimately decide who governs.

But on election night, as the voter swing against the government became clear, Australian Labor Party leader Bill Shorten said whatever the result his party was "unified" and "more determined than ever". 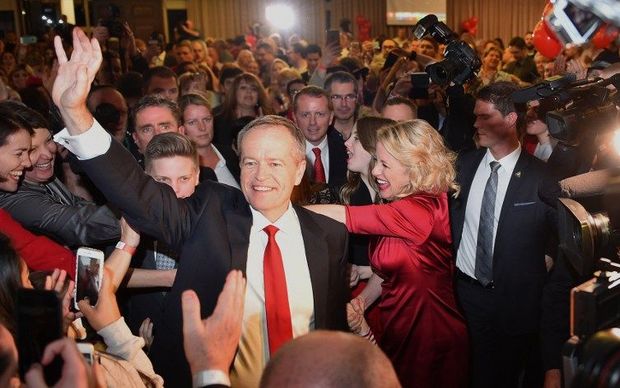 Starting out as underdogs, the mood in Labor's party HQ was subdued, but quickly moved to one of sheer excitement as the results started rolling in.

Senior Labor frontbencher Brendan O'Connor told the crowd Labor had been written off before the election as being in the wilderness and bereft of policies.

"In that short time we have seen cohesion, a unity of purpose and a focus on policies and that has been as a result of the collective efforts of the Labor movement, the Labor Party, the federal parliamentary Labor Party, but in particular it's been as the result of the leadership of Bill Shorten."

As the count progressed, the room quickly filled with those wearing red T-shirts and by the time the large, wooden doors swung open to mark their leader's arrival, the crowd was chanting his name.

Onlookers could have been mistaken that the new prime minister of Australia had then entered the room, as the crowd erupted into screams and whooping.

Mr Shorten told them they may not yet know the final result - but Labor was back.

"In the past eight weeks we have run a magnificent campaign.

"We have argued for our positive plans and three years after the Liberals came to power in a landslide, they have lost their mandate."

The crowd was hanging on his every word as he hit out at the Coalition, saying the election had delivered anything but stability for the Liberals and Nationals.

"Mr Turnbull's economic programme, such as it was, has been rejected by the people of Australia," Mr Shorten said.

"Whatever happens next week, Mr Turnbull will never be able to claim that the people of Australia have adopted his ideological agenda. He will never again be able to promise the stability which he has completely failed to deliver tonight."

"Friends, whatever happens next week, whether we are in government or in Opposition, the Labor Party is re-energised, it is unified and it is more determined than ever."

He refused to concede that Labor could not form a majority government.

"You know what a hung parliament means? It means there has to now be a question about confidence. People have to make choices."

"It doesn't mean we have to do a deal with the Greens. It means that people have to make choices about who they want to see in government."

"It was really impressive, nobody could have thought you could come back after what happened three years ago. To do that was amazing."

"Now we are in a position where it's going to be in absolute disarray through the next term."

There were already reports that Bill Shorten's leadership could face a challenge, but Mr Shorten said he had never felt more secure in his role.

Mr Shorten said Labor was the winner from the weekend's federal election, despite there being no clear result.

The government suffered a 2.8 percent swing against it at the election, and as of Sunday afternoon had won 65 seats to Labor's 67, with 13 remaining in doubt.

More than 20 percent of votes are still to be counted.

A party needs 76 seats to form a majority government, and the exceptionally close vote raises the possibility that independents and minor parties may hold the balance of power.