Early counting in Australia's national election showed a sizeable swing to the opposition Labor Party, though results on Saturday were too close to call. 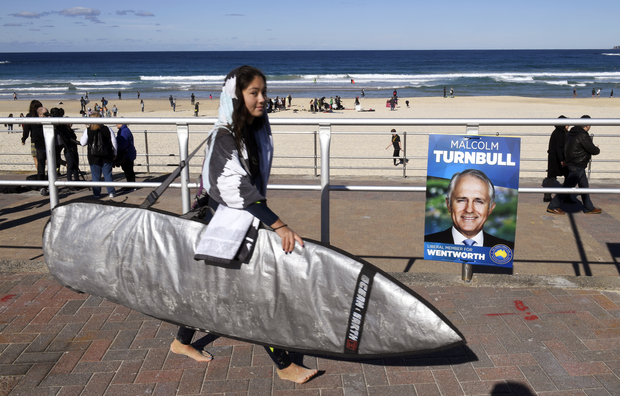 A surfer walks past an election placard for Prime Minister Malcolm Turnbull in the Sydney suburb of Bondi Beach on Saturday. Photo: AFP

More than 10 million people cast ballots on Saturday, on top of four million who voted early.

Look back at how the first half of the count unfolded.

Mr Turnbull, the leader of the conservative Liberal-National Coalition, dissolved both houses of parliament in May in a bid to oust intransigent independents in the upper house Senate who had blocked his agenda, including company tax cuts.

But his gamble was at risk of backfiring as the Coalition faced a strong challenge - not only from Labor, led by Bill Shorten, but from independents.

According to some polls, minor parties and independents were capable of winning enough seats to hold the balance of power in the Senate or force a minority government in the lower house.

About 10.30pm on Saturday, with polling closed across the country, the Australian Electoral Commission reported a 3 percent swing to Labor (on a two-party count with the Coalition) with about 20 percent of the vote counted. It projected 63 seats to the Coalition and 62 to Labor.

Labor required a uniform swing of about 4 percent to win government, but a significant smaller shift was seen as likely leave the Coalition with a minority government. 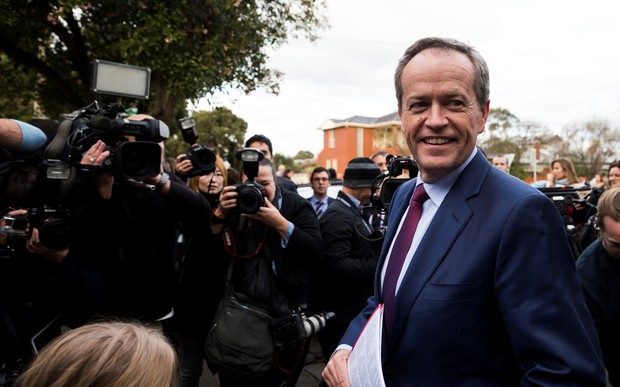 At the Labor Party's federal election headquarters at the Moonee Valley Racecourse in Melbourne, the mood was initially subdued but cheers began to ring out as Labor pulled ahead in key seats - the parties had 16 seats each in Victoria in early voting.

Mr Shorten had spearheaded an opposition campaign focusing on coalition cuts to health and education policies.

Meanwhile, with 150 seats in the House of Representatives, the Coalition required 76 seats to maintain its outright majority and avoid having to form an alliance with a third party to form a government. 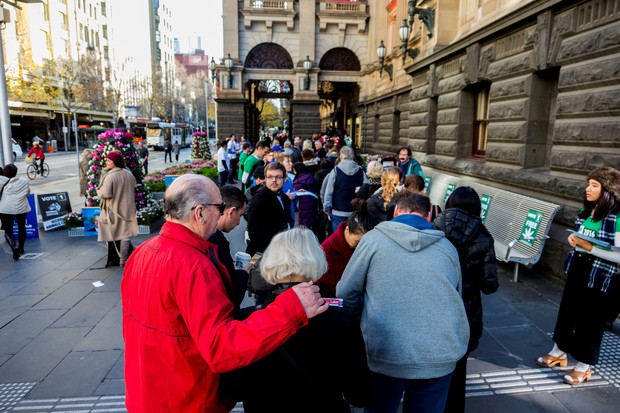 Voters line up to cast their ballots at the Melbourne Town Hall. Photo: AFP

Mr Turnbull had invoked the impact of Brexit in his campaigning, arguing that minor parties, possibly in a coalition with centre-left Labor, could not be trusted to manage a turbulent economy hampered by the first mining downturn in a century - or balance public finances after years of deficits.

At the Coalition's headquarters in Sydney, the mood was nervous and quiet with Finance Minister Mathias Cormann arriving but heading straight to a back room.

In contrast, supporters at the Adelaide headquarters of the independent centrist Nick Xenophon Team, which was expected to emerge as a powerful force in the Senate, gave a huge cheer to candidate Rebekah Sharkie.

Ms Sharkie was on track in the first part of the count to win the lower house seat of Mayo in South Australia, representing another potential lost seat for the Turnbull government.

Mr Xenophon had vowed to block the Coalition's cornerstone $AU50 billion corporate tax cuts if his party held the balance of power in the Senate.

Far-right parties, including Pauline Hanson's One Nation, had campaigned on anti-immigration, anti-Muslim agendas. Hanson had also been a strong contender to win a position in the Senate. 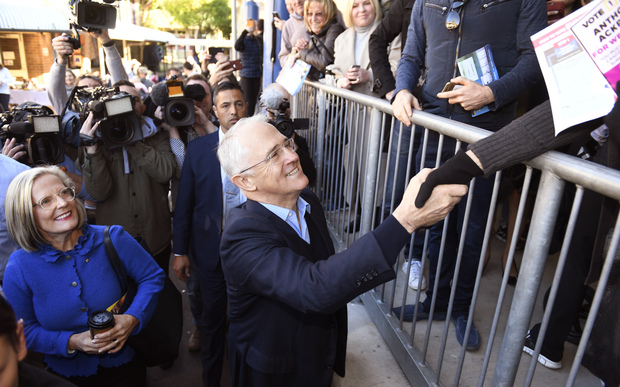 Mr Turnbull and his wife Lucy leave a polling station after casting their vote in Sydney. Photo: AFP 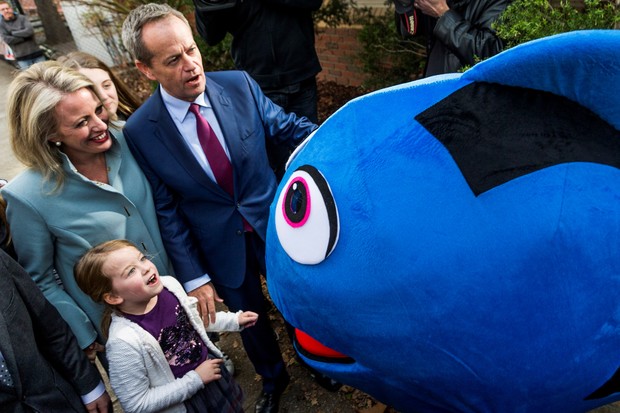