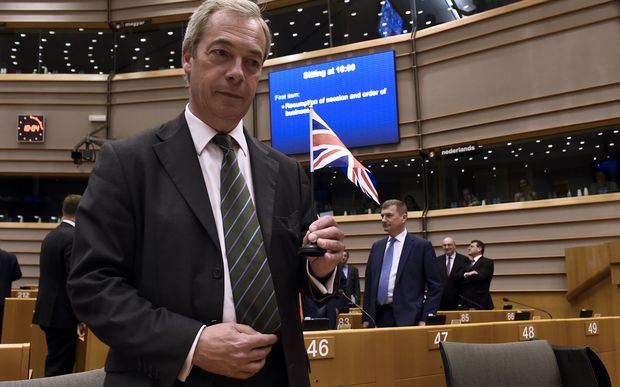 Mr Farage shot back that the EU itself was "in denial".

UK Prime Minister David Cameron has arrived in Brussels for his first talks with leaders of the other 27 EU states since Thursday's referendum.

"I'll be explaining that Britain will be leaving the European Union but I want that process to be as constructive as possible," he told reporters before going in to meet his counterparts.

An EU official close to the talks told the BBC the mood was "very, very serious" and a question mark hung over the UK's next presidency of the EU, due to begin in the second half of next year.

"The leaders are very interested in hearing the UK's timeline but everyone knows Cameron won't trigger Article 50 [the first formal step in the withdrawal procedure]," the source added.

The announcement of Mr Cameron's replacement as leader of the Conservative Party, and thus prime minister, is not due now until 9 September, with 11pm (NZT) Thursday as the deadline for nominations.

European Commission President Jean-Claude Juncker warned against delay in starting the exit process: "I don't think we should see any shadow-boxing or any cat-and-mouse games. It is clear what the British people want and we should act accordingly."

The European Parliament passed a motion urging the UK to start the exit process by triggering Article 50 immediately.

Opening the session, Mr Juncker said the will of the British people must be respected, prompting shouting and clapping from Mr Farage.

"You were fighting for the exit, the British people voted in favour of the exit - why are you here?" Mr Juncker responded, to applause from others in parliament. 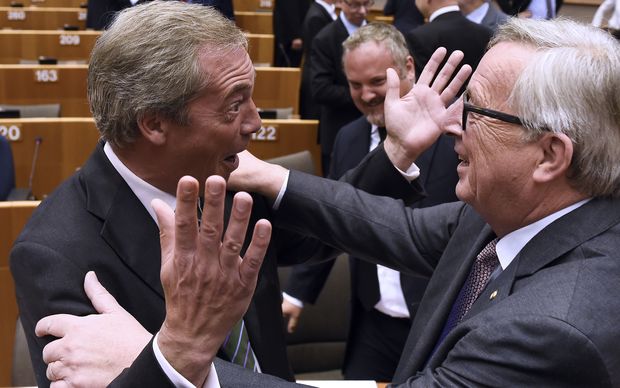 He accused Mr Farage of lying about using Britan's EU contributions to fund the country's National Health Service, saying he had "fabricated reality".

"Finally we are going to get rid of the biggest waste in the EU budget, which we have paid for 17 years, your salary!" he told Mr Farage.

Hitting back, Mr Farage told parliament that they were "in denial".

He said hardly any of the MEPs had ever done a proper job in their lives, or created one.

"We now offer a beacon of hope to democrats across the European continent," he said. "The UK will not be the last member state to leave the EU." 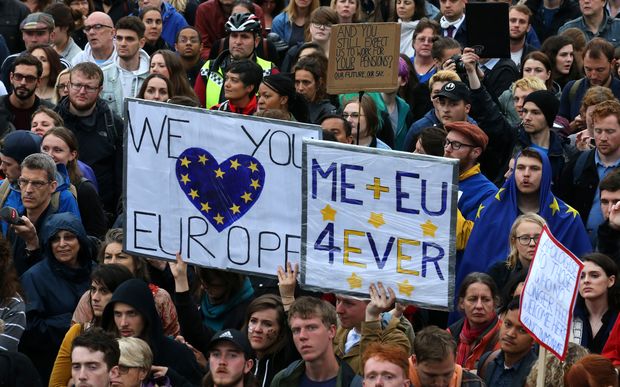 In a speech to the German parliament, Chancellor Angela Merkel said the EU was strong enough to survive without the UK.

She said she respected the result and warned the bloc would not tolerate British "cherry-picking" when it came to negotiations.

"There must be and will be a noticeable difference between whether a country wants to be a member of the European Union family or not," she said.

In the stormy and deeply emotional debate, many MEPs expressed sadness at losing the UK. There was a standing ovation for the UK's outgoing Commissioner, Lord Hill.

Meanwhile, MPs from Britain's Labour Party have passed a motion of no-confidence in their leader Jeremy Corbyn, in the wake of Britain's vote to leave the European Union

The overwhelming 172-to-40 vote is not binding.

More than 20 members of Mr Corbyn's shadow cabinet have resigned.

Many feel he did not campaign hard enough to keep the country inside the EU, and will not be able to win a future election.

But the leader's allies have told his critics to trigger a formal leadership contest if they want to challenge him.