Residents in Southern Queensland and New South Wales are being warned to prepare for wild weather predicted to hit over the weekend just a fortnight after the same areas were devastated by massive storms. 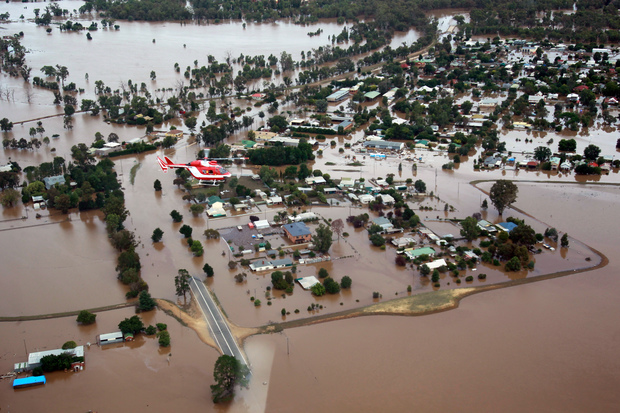 The downpours and storms are forecast to strike areas between Townsville in the state's north to the NSW border, but the Bureau of Meteorology (BoM) said a dangerous east coast low would miss Queensland.

Residents of Sydney's northern beaches are working to protect their homes and up to 100 giant sandbags were being placed in front of homes at Collaroy Beach for a temporary seawall.

Many homeowners had their properties pummelled by storms and waves of up to eight metres earlier this month, leaving an eroded coastline and costly damage bills.

BoM said the deep trough would move further east over the interior of Queensland, with rain areas and gusty thunderstorms extending over western districts.

It is predicted the heaviest rain would be closer to the surface trough, most likely affecting locations such as Urandangi, Boulia, Isisford, Blackall, Augathella and Charleville.

The BoM said southern and central Queensland could face widespread rainfall totals of 50-80 millimetres, with isolated totals in excess of 100mm possible.

"Even for this time of year, it's quite unusual," senior forecaster Michael Knepp said.

"The biggest threat we would have from Sunday is if a storm event occurred and the storm stayed stationary," he said.

"When you get those torrential downpours over a sustained period, that's when those creeks overflow and can cause habitable floor areas to be flooded."

Moreton Bay Regional Council Mayor Allan Sutherland said he did not want any public foolishness when the flooding happened.

"Keep the kids inside, don't go out and play in those drains. We didn't have loss of life injuries in the last event, let's hope we keep it that way," he said.

"Mum and dad, keep the kids inside, if it is really going to come down like they say on Sunday, no playing in the drains and creeks because that water backs up in the catchment and then all of a sudden it lets go."

Cr Sutherland said Moreton Bay was in a position to handle extreme flooding.

"Our Moreton alert system is ready to be activated as soon as we know we have got our sandbag stations ready to go," he said.

"We have been very fortunate. We are pretty used to this, we are ready to rock and roll, we get a lot of warning."