Thousands of residents in the Tasmanian city of Launceston have been told to evacuate as the deadly deluge hitting eastern Australia continues south. 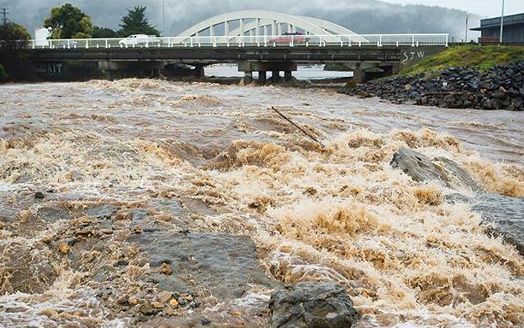 Major river systems in the north of Tasmania have risen from record rain that has left two people dead and another two missing.

The death toll from the storms that began thrashing east Australia since Saturday now stands at five. Two people were found dead in New South Wales and one in Canberra, Australian Capital Territory (ACT).

Another body was found at Dover Heights in Sydney during a search for a missing swimmer off Bondi Beach.

The body of another man was recovered from a swollen river in Canberra.

About 3000 residents and 800 businesses have been told to evacuate in the low-lying Launceston suburb of Invermay.

Police are pleading with Tasmanians to be careful around floodwaters as the search continues for two missing men.

An elderly man is still missing from Ouse in the south, and the search continues for a man whose car was swept away by rising floodwaters at Evandale in the north.

A woman who was in the same car was rescued - one of 100 rescues in flood-affected areas. The rescued included 20 people winched to safety by helicopter.

Earlier police recovered the body of Mary Alford, 75, from her home at Latrobe in the state's north-west.

Her husband had lost contact with her before being rescued off the roof of their house yesterday morning.

Devastation due to storm plus king tide

The wild weather that caused flash flooding in Queensland on Saturday continued on to pummel New South Wales and the Australian Capital Territory.

Hundreds of people were evacuated at the weekend, as heavy rain and damaging winds from a low pressure system battered the state.

Over 500 people were forced from their homes in Lismore, northern New South Wales, as floodwaters peaked at 9.1m late on Sunday.

The state's Emergency Services Minister David Elliott said king tides were to blame for the devastating impact of the storm, which he said was "like a continuous bashing".

More than 8000 people called the State Emergency Service for help and beachside houses at Collaroy on Sydney's northern beaches were so badly damaged they may have to be dismantled.