Three people remain missing and five people are known to be dead, as the massive storm cell that devastated parts of Australia's east coast causes record flooding in Tasmania.

The body of a woman has been found in northern Tasmania, a day after her husband was rescued through the roof of their flooded home.

Earlier today, police rescued a woman who was caught in a car in rising floodwaters near Evandale, in Tasmania's north, but the search for her companion continues.

The search has also resumed for Trevor Foster, who is in his 80s and cannot be found. 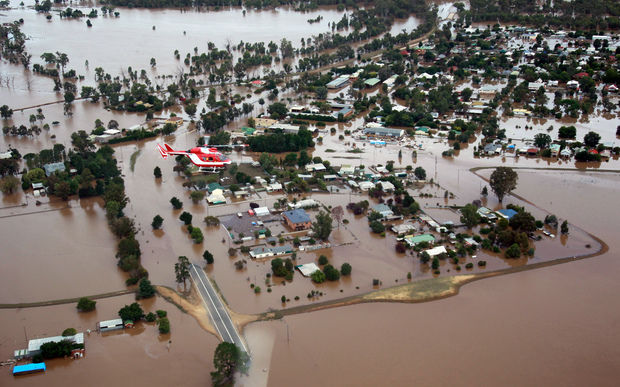 Police said 107 people had been rescued from flood-affected areas, and Commissioner Darren Hine urged people to stay away from floodwaters.

"We rescued over 100 people who have made poor decisions and put themselves into danger by entering flood waters," he said.

"We've rescued over 20 people with the helicopter, and again while were doing this, we can't do our other duties and takes away our resources where they may be needed to save lives."

Tasmania's State Emergency Service (SES) had shifted its focus to the South Esk River, the town of Longford and the Launceston suburb of Invermay.

People in the Launceston suburb of Invermay had been advised to evacuate their homes immediately.

Two evacuation centres were available at the Silverdome in Prospect and the University of Tasmania at Newnham.

While the South Esk had flooded, it was not expected to peak until tonight or Wednesday morning.

Worst of Queensland's wild weather over

The wild weather hit Queensland on Saturday and moved south over the weekend to New South Wales, where a search is continuing for a swimmer missing off Bondi Beach in Sydney.

A body had been found at Dover Heights in Sydney's east during the search for the missing man, but it hadn't been confirmed that he was the person whose body was found. 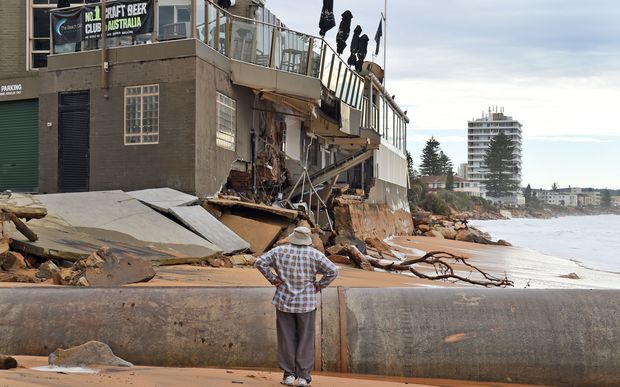 A man looks at the damage at Collaroy on Sydney's northern beaches. Photo: AFP

Emergency services in NSW said it was too early to assess the damage after king tides peaked along the New South Wales east coast on Monday night.

Australia's Bureau of Meteorology said the low pressure system was losing strength as it moved off the coast, but a large swell and king tides would raise the risk of flooding, beach erosion and coastal inundation in all coastal areas south of Port Macquarie.

For central areas of the coast, the threat of erosion was unlikely to be as high as Sunday night's event, as the wave heights would be lower, the bureau said.

The Bureau of Meteorology's Tony Yates said, while more rain was forecast, the worst had passed.

"There will be further rainfall today but no really significant falls, and there'll actually be some periods where it will ease off completely, so the worst of it has definitely passed," he said.

'This is a national disaster'

Deputy Premier Jeremy Rockliff described the Tasmanian floods as a national disaster and the state government has offered emergency aid to those who have lost homes and belongings. 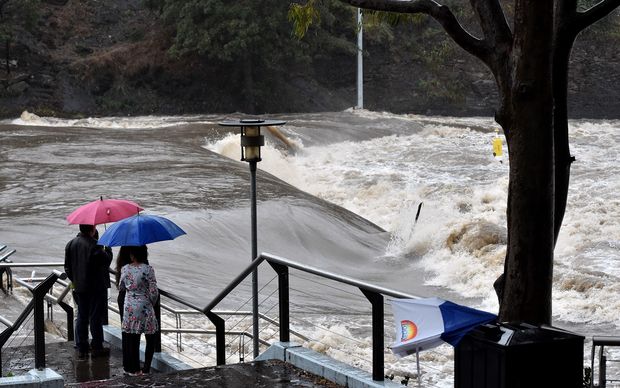 "State and federal governments have to work together, this is a national disaster relief scenario, many lives will be shattered, it's devastating and still very dangerous," Mr Rockliff told 936 ABC Hobart.

The SES will be conducting a detailed impact assessment today.

Meanwhile, Premier Will Hodgman described the floods as catastrophic.

"It's certainly disastrous, this is an extreme weather event, the worst flooding we've experienced in this state in 40 years and it's likely to get worse - it's likely to cause further damage," he said.

The Insurance Council of Australia had declared the event a catastrophe and had established a taskforce.

Mr Rockliff said the floods had hit farmers particularly hard, with some losing hundreds of livestock.

"I've spoken to a number of farmers, vegetable processors and the situation is catastrophic for them," he said.

There had been numerous reports of livestock being swept away by floodwaters but the full extent of stock losses was yet to be known.

One man at the flooded Horsehead Creek, near Devonport, shepherded several cows to safety using his stand-up paddleboard.

The floodwaters rose so quickly on Sunday night and Monday morning he was not able to get his 500 cows to higher ground.

"The cows stood up to their bellies in water but I don't know where they are now." he said.

"There's probably 100, if not more. Neighbours have lost more than that and there's a lot of damage, hundreds of thousands of dollars worth of damage," he said.

"It's devastating. I watched some neighbours' cows go down the river yesterday.

"Just terribly sad, you can hear them bellowing and you can't do anything."

On Monday, NSW Police said divers had retrieved two bodies from cars that were washed away in flood waters.

The body of another man was recovered from a swollen river in Canberra.

NSW Police Acting Assistant Commissioner Kyle Stewart said it was a tragedy to see deaths despite constant warnings about the dangers of entering flood waters.

"We simply do not know how either of these two men came to be in the floodwaters. But what we know is that their deaths show just how dangerous floodwaters are," he said.

The body of the woman found in Tasmania today and the body found in Sydney brought the total confirmed death toll to five.