Violence has broken out between England fans, rival supporters and police over three days in the French city during the Euro 2016 football tournament. 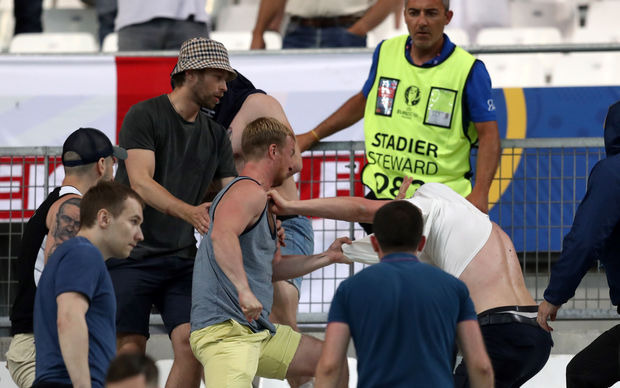 Supporters fight at the end of the Euro 2016 group B football match between England and Russia. Photo: AFP

Supporters clashed inside Marseille's Stade Velodrome after a stoppage-time equaliser secured Russia a 1-1 draw in the teams' opening Euro 2016 match.

Observers said the Russian supporters grabbed flags and threw projectiles, and fought anyone who remained in their way, forcing panicked England fans to clamber over barriers as stewards looked on.

The UK ambassador to France, Sir Julian King, said a number of British people were in hospital, and French police said one Briton had been seriously hurt in the earlier clashes. 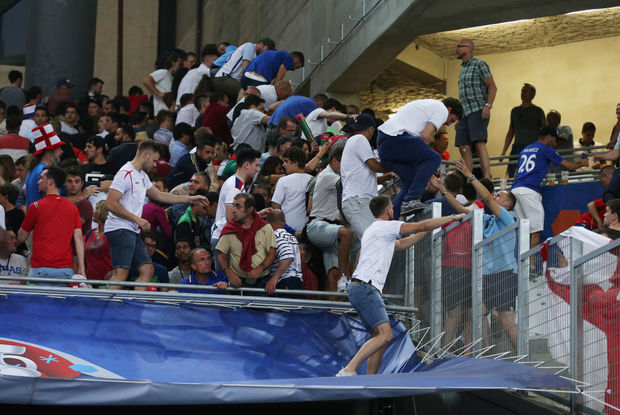 English football fans jump the fence to get away from the violence. Photo: AFP

Before the game, England fans were embroiled in fresh clashes with police and Russian supporters, with French police using tear gas and a water cannon for a third day in the southern port city.

Witnesses said trouble began in the stadium after flares were let off by Russian fans near the end of the game. Some fans had then climbed across barriers designed to keep rival fans apart.

"Big questions for (the Union of European Football Associations) Uefa here," he tweeted. "Stampede appears to have been triggered by explosion. How did such a device make it inside and where was segregation?"

A senior FA security official said he had not witnessed anything like it in nine major tournaments he had attended.

He added that the embassy was "reviewing the situation" with the French authorities.

Earlier on Saturday, French police said one Briton had had to be resuscitated by officers and was left in a critical condition.

There were also clashes in the city of Nice between police and fans from Northern Ireland and Poland, who are due to play their opening match later. Six people were reportedly injured, before order was restored.

Before the game fans had walked past ranks of police officers in riot gear on their way to the Stade Velodrome venue.

The great majority of fans appeared to be peaceful but there were some reports of trouble.

He said he had witnessed bloodied England fans being "dragged away by police", to the sound of sirens blaring out across the city's main square.

Police told the BBC that six people had been arrested and at least five had been injured during the scuffles. 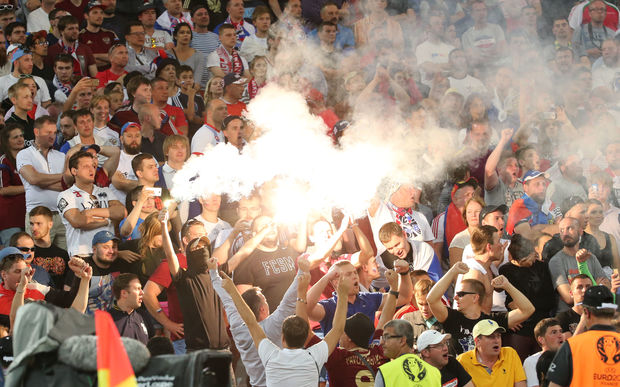 Some British journalists in the area have described the scenes on social media, and pointed the finger at a gang of black-clad Russians, who they said had entered the port city's main square from a side street, apparently seeking violence.

The Football Association has condemned the violence saying it was "very disappointed by the terrible scenes of disorder".

European football's governing body Uefa said it "firmly condemns the incidents in Marseille", adding that "people engaging in such violent acts have no place in football".