Turkish jets have targeted and killed a group of between eight and 10 militants suspected of belonging to the Kurdistan Workers Party (PKK), military sources say. 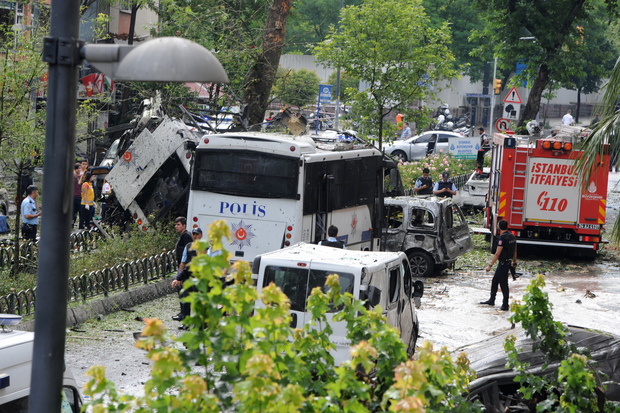 Police officers and rescuers inspect the site of a bomb attack that targeted a police bus in the Vezneciler district of Istanbul. Photo: AFP

They said the rebels were spotted late on Thursday in the Daglica region of Hakkari, which borders Iraq, where the PKK is largely based.

The Kurdistan Freedom Hawks (TAK), an offshoot of the outlawed PKK militant group, has claimed it carried a suicide bombing in Istanbul on June 7.

A car bomb ripped through a police bus in central Istanbul during the morning rush hour on Tuesday near the main tourist district, a major university and the mayor's office.

The attack resulted in the deaths of 11 people.

In a statement on its website, TAK said it was a suicide bombing. The website warned Turkey was no longer a safe place for foreign tourists.

A two-year-old ceasefire between Turkey and the Kurdish militant PKK broke down last summer.