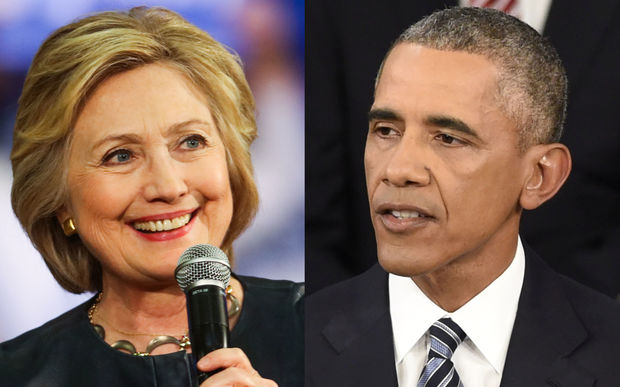 In a video tweeted by Mrs Clinton, Mr Obama said she may be the most qualified person "ever" for the role of president.

"She’s got the courage, the compassion, and the heart to get the job done."

The two are set to start campaigning together soon.

His endorsement came after he met Vermont Senator Bernie Sanders, where it is likely he urged Mr Sanders to end his battle with Mrs Clinton for the nomination.

Speaking on the lawn of the Oval Office after their meeting, Mr Sanders said he had not given up his campaign, but he was willing to work with Mrs Clinton to keep Donald Trump out of the White House.

The two ran against one another for the Democratic nomination in 2008 and Mr Obama later made Mrs Clinton Secretary of State.

"It is absolutely a joy and an honour that President Obama and I, over the years, have gone from fierce competitors to true friends," she said.

Mr Obama had been expected to support Mrs Clinton since she won enough delegates this week to clinch the Democratic nomination after winning four out of six primaries on Tuesday (local time).

Mrs Clinton is the first woman to lead a major US party as its presidential nominee.