More than 40 people, most of them children, have been injured by lightning strikes, at a park in Paris and a football match in Germany. 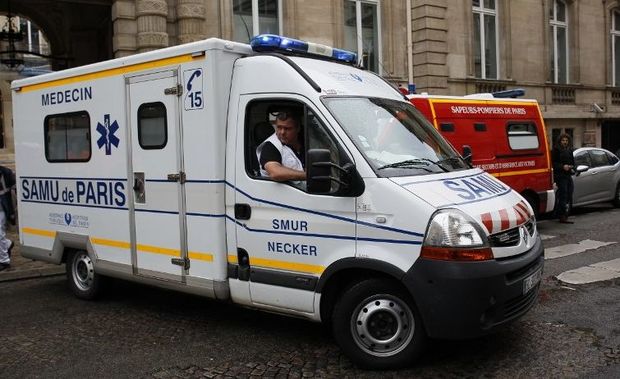 An ambulance leaves a building requisitioned to treat injured people, near the site of the accident at Parc Monceau in Paris. Photo: AFP

A man was killed in southern Poland as he was hit by lightning while descending a mountain.

In Paris, a birthday party in Parc Monceau was struck, injuring 11 people, eight of them children. Several are in a life-threatening condition.

Three people were seriously hurt at a youth football match in Germany.

Initial reports said 35 people had been injured at the match in Hoppstaedten in the country's south-west - however, many were taken to hospital as a precaution.

Paris police said the children injured in Parc Monceau on Saturday afternoon were aged about nine.

They were struck after seeking shelter under a tree, police said.

An off-duty firefighter, Pascal Gremillot, happened to be nearby and was able to rapidly administer first aid and heart massages. Officials said the situation would have been much worse if he had not been there.

Six of those injured are in a serious condition.

Reports in Poland said that a man in his 40s died after being hit by lightning while hiking in the mountains in the south of the country. Separately, a second man was found dead in a river swollen by heavy rains.

Another group of three tourists were struck by lightning in the mountains, mountain rescue told TVN24.

Witnesses to the lightning strike at a football match in Hoppstaedten said there were no dark clouds and the sky was blue when lightning struck at the end of the match.

The referee was one of three adults at the match who suffered serious injuries, police in Kaiserslautern said.

He took a direct lightning hit, suffered a cardiac arrest and was taken to hospital by helicopter.

Another man was also airlifted to hospital and a third was taken by ambulance. All three injured men were in their 40s, the police added.

According to German media reports, some of the child footballers, aged nine to 11, were taken to hospital as a precaution after electrocardiogram (ECG) investigations showed their heart function required further investigation.

Torrential rain also halted play at the French Open as defending champion Serena Williams was about to start a match against Kristina Mladenovic.