Dozens of lightning strikes lit up Wellington last night as a huge thunderstorm rattled the capital and cut power to 18,000 homes. 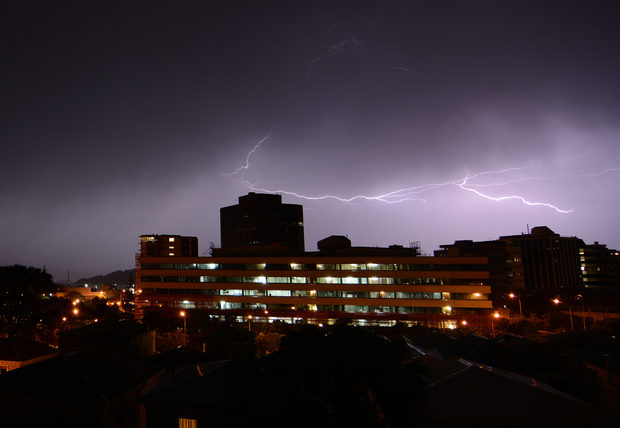 Sure I only just caught the lightning on my phone. #Lightning #Wellington pic.twitter.com/R2v0Zd3HOo

Wellington Electricity said 18,000 customers had been affected, but power has now returned to all homes.

Chief executive Greg Skelton said the company had restored power in stages to make sure the network was not overloaded.

He said lightning had struck hit the transformer that takes power from the National Grid near Gracefield.

Power went out in Wainuiomata, Eastbourne, Petone and the Southern parts of Lower Hutt, he said.

He said this latest was the fifth storm front to come through overnight.

As the lightning lit up the sky, thunder and heavy wind gusts shook houses in the capital last night, with some residents describing the storm as intense.

Share pictures or video of the storm with us at iwitness@radionz.co.nz

So I managed to capture some storm in a gif. #Wellington pic.twitter.com/ICJFm3D9zp

MetService said the "impressive" line of thunderstorms moved quickly through the capital then off to the east of the city.

The forecaster said the storms were swept in to the city by an active band of rain.

Active band of rain that brought thunder and lightning to Wellington. Line is moving to the east of the city now.^NR pic.twitter.com/kDFni0JO02

Although there were thousands of lightning strikes across the country last night MetService said the thunderstorm was is one of the smaller ones in recent weeks.

Winds were strongest around Wellington, with 118km/hour gusts recorded on the Rimutakas.

MetService meteorologist Lisa Murray said the typical autumn weather, with a westerly airflow, would hang about until the weekend.