Tight security is in place in Hong Kong for the visit of the most senior official from Beijing since large pro-democracy protests in 2014.

Zhang Dejiang, the leader responsible for Hong Kong affairs, arrived amid discontent with interference by Beijing.

Mr Zhang said he was in Hong Kong "to listen to all sectors of society".

More than 6000 police have been deployed amid planned protests by pro-democracy groups. 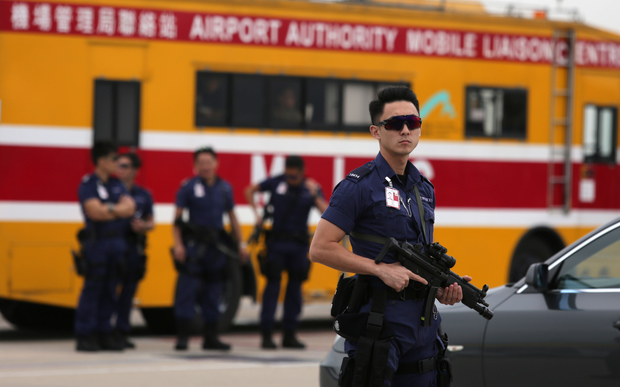 Mr Zhang, who is also chairman of the National People's Congress Standing Committee and so China's third-highest ranking leader, will speak at an economic conference during his three-day visit, but will also meet with a group of pro-democracy lawmakers.

In a five-minute speech on arrival, he conveyed "President Xi Jinping's warm regards and well wishes for the people of Hong Kong" and said he came "with the care of the central government and all Chinese people".

Noting his trip had "attracted wide attention", he said: "I will listen to the chief executive and the [Special Administrative Region] government regarding their work, and to all sectors of society about what recommendations and requirements they have about implementing the principles of "one country, two systems".

The South China Morning Post said security was tight at the airport. It said guards reportedly took away journalists' umbrellas, along with a small yellow towel used by one reporter to cover a camera lens.

Umbrellas, particularly yellow ones, have become a symbol of the pro-democracy movement. 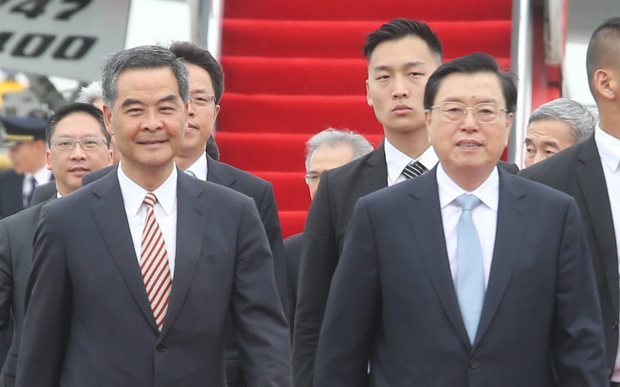 Mr Zhang is the highest ranking Chinese official to visit Hong Kong since 2014, when thousands of protesters took over major parts of the city to demand fully free elections.

Since then a number of so-called "localist" groups have sprung up and shown themselves willing to use violence to battle what they see as a dilution of the city's identity, fearing growing social and political influence from mainland China.

In February, hundreds of demonstrators, fuelled by such localist sentiment, dug up and threw bricks during a violent clash with police as they tried to shut a night food market.

The market was seen by the protesters as a symbol of local traditions.

Earlier this month, reports said paving stones had been reinforced with glue around the legislative building so that they could not be used as projectiles.

And on Monday a Hong Kong man was arrested just over the border in Shenzhen for trying to buy a drone purportedly to be used to disrupt the visit.

The intensity of security arrangements around Mr Zhang's trip are a sign of just how concerned the authorities are. 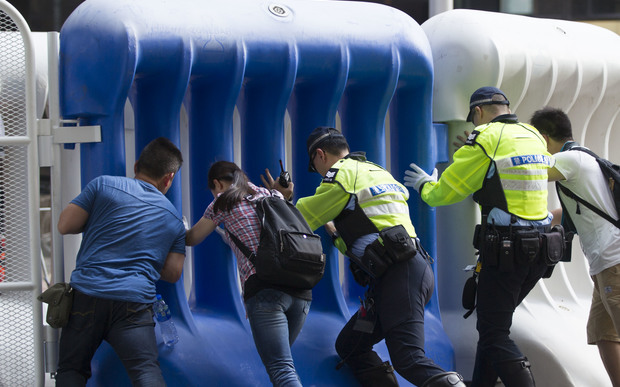 But pro-democracy activists are upset they will be denied the chance to get close to Mr Zhang, and have vowed to challenge the security restriction.

Hong Kong enjoys freedoms unseen on the mainland, which were integral to the handover agreement when Hong Kong was returned to China by the British in 1997.

But concerns that such freedoms could be in question were heightened by the disappearance of five Hong Kong booksellers known for publishing controversial books about Chinese leaders.

The men were later found to have been detained by mainland authorities in what the UK foreign office called a "serious breach" of protocol.