Thousands of pro-democracy protesters took to the streets of Hong Kong for the first time since mass demonstrations shut down parts of the city for more than two months. 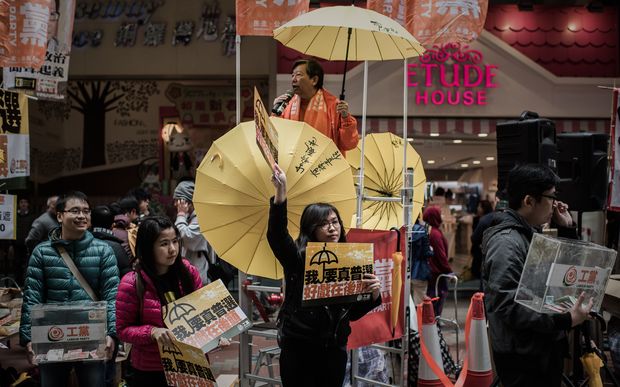 Around 2000 police will be deployed, according to local media. Photo: AFP

A sea of yellow umbrellas - the symbol of the campaign - moved slowly through central Hong Kong with crowds shouting for "true universal suffrage".

Organisers had said the rally would draw 50,000 people. An AFP reporter estimated that several thousand had joined the march by mid-afternoon but no police estimate was available.

But no protest group has announced it intends to relaunch the occupation, and the march began peacefully on Sunday afternoon with many carrying yellow balloons.

The rally will gauge the public's willingness to keep fighting for free leadership elections.

Authorities have made no concessions to activists' demands and tensions remain high in the semi-autonomous Chinese territory.

"We just want to express our frustration with the government in Hong Kong," said protester Ronnie Chan.

"We understand there is very little we can do, but if we don't speak out nothing will change."

Officials in December cleared protest camps which had blocked several main roads. Rallies drew around 100,000 at their peak and saw intermittent violent clashes with police.

China promised Hong Kongers the right for the first time to vote for their next chief executive in 2017. But it ruled that nominees must be vetted by a pro-Beijing committee, a proposal which has been heavily criticised by activists.

Organiser Daisy Chan said the rally would show that the Occupy movement, as the protests were known, was a political awakening.

"In the past, these citizens were less political than they are right now. The Occupy movement woke people up."

The founders of the movement including Benny Tai, along with teenage activist Joshua Wong and other student leaders, are also attending the rally.

Student activist Alex Chow said there was no plan to take back the streets.

Around 2000 police are being deployed to the rally, according to local media.

Hong Kong's government is urging the public to support Beijing's electoral plan, which needs the backing of two-thirds of the city's legislature to be passed.

"You can't threaten the central authorities," he told a radio programme Sunday.

"If we can have consensus to have universal suffrage in 2017 first and democratise further later, it would be a more pragmatic approach," he said.