United Nations Refugee Agency has called for the immediate transfer of refugees and asylum seekers out of the Australian-run detention camps on both Manus Island and Nauru. 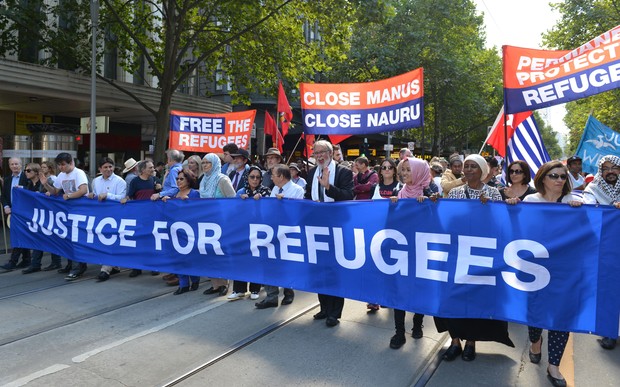 A team from UNHCR was on Nauru when Omid Masoumali, a young Iranian man, set himself on fire.

He later died in a Brisbane hospital.

Just days afterwards, a 21-year-old Somali woman also set herself alight. She remains in a critical condition in hospital in Brisbane.

Catherine Stubberfield from the UNHCR said the mental health of people in the detention camps was deteriorating.

"These are highly predictable outcomes of prolonged detention. And they're really symptomatic of the fact that people have now lost all hope.

"And I think when we talk about these incidents we need to think about how people feel - having fled trauma, persecution, war - thinking that they've come to a place of safety."

Ms Stubberfield said such trauma combined with being held in a highly securitised environment in a constant state of uncertainty where individuals "have no agency over their lives" over the course of many years.

She said that had directly contributed to the events of recent weeks.

Australia's Immigration Minister Peter Dutton said yesterday advocates and others were pressuring refugees to "behave in a certain way", but that the government would not change its policies.

He also denied the recent protests were in response to living conditions on Nauru and Manus Island.

"There is not a complaint about the living conditions, the medical services, the education, the 300 people or so who are employed on Nauru, the 30-odd who have started up small businesses," he said.

"These complaints are largely because people want to come to Australia.

"I can understand that people have paid thousands of dollars to a people smuggler and they want to come to our country."

However, Ms Stubberfield maintained that the Australian people did not have a good picture of what was actually taking place in Manus Island and Nauru due to the continued media blackout.

"What we [UNHCR] really see on our monitoring missions is that people live in poor physical conditions, they're overcrowded, they don't have access to basic services ... they're not getting the support they need," she said.

"I think rather than detract from that, in terms of speaking about the impact of publicity, we need to speak about the reality of the immense damage done by the current offshore detention and processing policies."