Nauru is due to hold elections about the middle of this year but opponents of the government say campaigning will be difficult given curbs on what they can say. 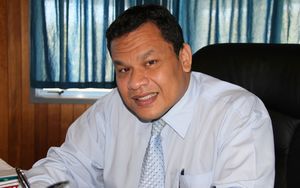 Two years ago, the government suspended the bulk of the parliamentary opposition.

He said recent law changes made criticism of the government a criminal act.

"They amended the criminal code that you are not allowed to criticise the government, because if you do you face seven years in jail," said Mr Dabwido.

"So our campaign is basically based on what we can do for Nauru, but we cannot tell what the government did wrong."

Sprent Dabwido said the government is required to name an election date when the parliamentary session ends next month.

The government has previously been criticised for using public money to support its prospective candidates ahead of the election.

It also recently announced a 20-fold increase in the charges for people wanting to stand.