Donald Trump's last remaining challenger for the Republican Party presidential nomination, John Kasich, has announced he is dropping out of the race. 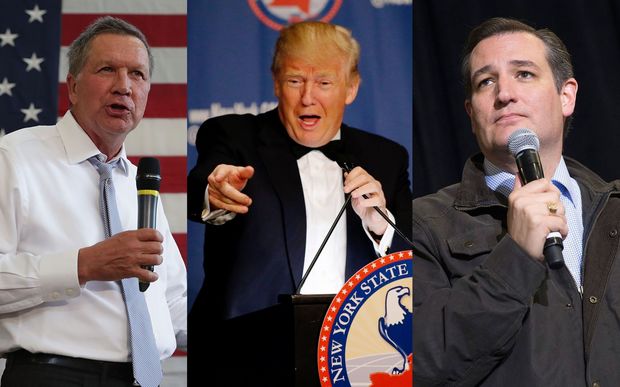 John Kasich, left, dropped out of the US presidential race a day after the withdrawal of Ted Cruz (right), leaving the way clear for Donald Trump. Photo: AFP

Mr Kasich did not have a path to secure the nomination outright, but pledged to lobby for his candidacy during the Republican convention in July.

The Ohio governor cancelled a media appearance on Wednesday in Virginia, and in a statement in his home state said he was suspending his campaign.

Media reports said he would suspend his campaign, a day after Texas Senator Ted Cruz dropped out of the race, having lost to Mr Trump in the Indiana primary.

Mr Kasich and Mr Cruz had hoped to force a contested convention, in which party officials, not voters, choose the nominee. Now it is all but certain Mr Trump will have the 1237 delegates needed to become the nominee before the July convention in Cleveland, Ohio.

Mr Trump, a former reality television star, has never held public office. He faces persistent opposition from some party loyalists who fear his positions on key issues could set up Republicans for massive losses to the Democrats in the election.

Mr Trump's immediate challenge is to mend deep fissures within the Republican Party, easing tensions with party loyalists who have been dismayed at his campaign style, denigrating comments about women and proposals to build a wall on the border with Mexico and deport 11 million illegal immigrants.

But in a series of Wednesday morning television interviews, Mr Trump, 69, made clear he would not forget some wounds from a tumultuous primary campaign in which many establishment Republicans rejected him and spawned Stop Trump and Never Trump movements.

"I am confident that I can unite much of it, some of it I don't want," Mr Trump said on NBC's Today show.

"Honestly, there are some people I really don't want. People will be voting for me. They're not voting for the party."