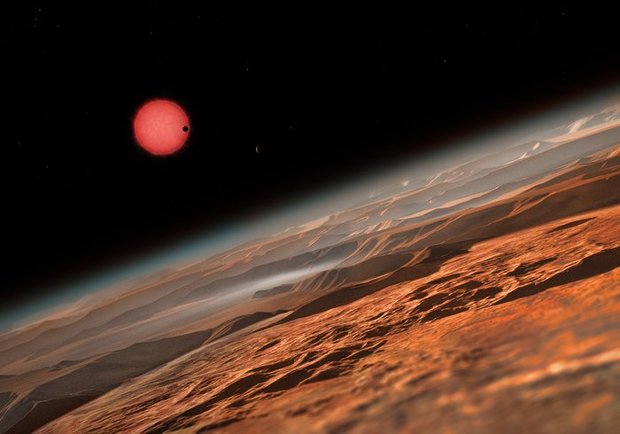 An artist’s impression showing the possible view from the surface one of the three planets orbiting an ultracool dwarf star just 40 light-years from Earth. Photo: ESO/M. Kornmesser

The discovery, reported today in the journal Nature, is the first evidence supporting the hypothesis that these very low-mass and low-temperature stars should have Earth-sized or smaller planets orbiting them.

The planets, which are the size of Venus and Earth, are currently the best places to look for life outside our solar system, said the team of researchers led by astronomer Dr Michaël Gillon, from the University of Liege in Belgium.

"Systems around these tiny stars are the only places where we can detect life on an Earth-sized exoplanet with our current technology," Dr Gillon said.

"So if we want to find life elsewhere in the universe, this is where we should start to look."

The planets were found almost by accident, as an international group of astronomers were conducting a test survey of an ultra-cool dwarf star labelled TRAPPIST-1, which lies in the constellation of Aquarius.

"We were preparing a much more ambitious project that will start this year, which will use a bigger telescope operating from Chile, and this prototype was meant to assess the feasibility of the project, but it worked so well that it detected an amazing system around a nearby ultra-cool dwarf," Dr Gillon said. 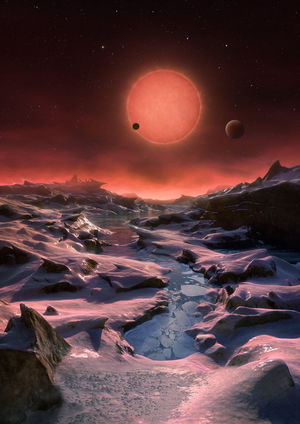 An artist’s impression showing the possible view from the surface one of the three planets orbiting an ultracool dwarf star just 40 light-years from Earth. Photo: ESO/M. Kornmesser

The star, TRAPPIST-1, is about the size of Jupiter but is one thousand times dimmer than our Sun and shines in the much cooler infrared part of the light spectrum.

Orbiting it are three planets; two orbiting within 1.1 to 1.5 per cent of the distance between the Earth and the Sun and passing in front of the star every one to two days.

"Because the star is so faint, so small and cold, it emits much less photons so these planets should have temperatures which are quite similar to Venus," Dr Gillon said.

A third planet was found further out from the star but its orbit is less well-characterised, with researchers estimating that it passes in front of the star anywhere from every four to 72 days.

This distance puts the third planet in the middle of the so-called "Goldilocks Zone" of habitability, which means it could have a temperature range similar to that found on Earth, Dr Gillon said.

While astronomical theory suggests these ultra-cool, low mass stars would have Earth-sized planets orbiting them, astronomer Dr Simon O'Toole from the Australian Astronomical Observatory said finding them was far from easy.

"That's one of the neat parts of the project; that they basically stare at all the stars like this for as long as they can, then trying to find the transits, the dimming in brightness, and then try to find it periodically," Dr O'Toole, who was not involved in the study, said.

The researchers used a small 60cm telescope to monitor the brightness of TRAPPIST-1 every 1.2 minutes for 245 hours over 62 nights.

The small telescope picked up the periodic dimming of the star, which suggested planets were passing in front of it and blocking some of its light.

The research team then used three much larger telescopes in India, Chile and Hawaii to confirm that these were indeed planets orbiting the star.

"It's a phenomenal measurement ... it's really, really challenging, they're pushing the limits of their equipment," Dr O'Toole said.

The presence of such relatively large planets so close to such a small sun suggests that their formation happens very differently to the manner in which the planets in our own solar system formed around our much larger Sun, Dr Gillon said.

The next phase of the study involves a more detailed study of the composition and atmosphere of the planets using the Himalayan Chandra 2-metre Telescope in India, and the James Webb Space Telescope which is scheduled to launch in 2018.

"With this we will be able to really study the atmosphere and the composition, detect bio-signatures if there are traces of life, and we will also determine the masses of the planet, which are still unknown," Dr Gillon said.