ANALYSIS: After a two-week sojourn, US voters were back at the polls this week in New York state, giving thumping wins to Donald Trump and Hillary Clinton. 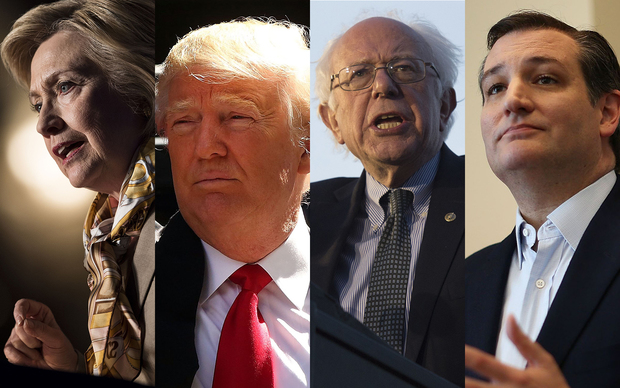 Donald Trump managed to win 60 percent of the votes and took 90 of the 95 Republican delegates, while Ted Cruz failed to get any, learning that New Yorkers will always remember a slight.

This shellacking means it's still technically feasible - though pretty tough - for the Donald to reach the magic delegate total of 1237 and win the nomination on the first ballot. To do so, he has to continue thumping Mr Cruz across the coming contests. But while many are more friendly to Mr Trump than Mr Cruz, they are not all his natural constituency.

Mr Cruz is never going to reach the magic number. His efforts are going into denying Mr Trump the majority, while selecting turncoat delegates that will switch to him on the second or third ballots. He is finagling delegate selection so that while the individuals chosen as convention delegates are officially there to vote for Mr Trump or Marco Rubio or whoever, they actually support Mr Cruz.

So with every convention ballot that doesn't select Mr Trump, increasing numbers of the delegates become free agents, gagging to change their support to Ted Cruz.

But overall, it was a bad day for Mr Cruz. To make it worse, progressive star Elizabeth Warren piled on with a lesson in a Twitter take-down, calling the senator a whiner for complaining that running for president is hard work.

In the meantime, Mr Trump seems to have decided that this isn't just a fun game for millionaire amateurs and self-promoters. He has rejigged his campaign team and moved from enthusiastic amateurs to seasoned pros. It's possible that at this late stage, he's decided he would actually like to win.

Senator Bernie Sanders campaigned his heart out in his boyhood home, but - despite an increasingly flinty, bitter, even desperate edge, more money spent, and some big rallies - the results were pretty much exactly what the polls expected a few weeks ago.

The Bern even lost the block he grew up on, though the neighbourhood has changed a lot since he was a boy.

It was always going to be an uphill battle in the state in which Mrs Clinton won two senate campaigns and beat Barack Obama. Even so, Mr Sanders arguably ran a terrible gaff-filled campaign.

But wait, I thought Sanders was winning?

Bernie Sanders is winning on social media (his fan base is young), so if you only got your news from social you might get the impression he was on the verge of being made emperor of the universe. He's not.

Conversely, Mrs Clinton gets a rough time in the media overall and is apparently the subject of more negative stories than even Mr Trump, which is quite a feat.

Mr Sanders wins small, mostly white, Republican-dominated states, especially those where the contest is open to registered independents (Mr Sanders is not a Democrat, he is an independent). And he does well at caucuses. The previous seven states to vote were mostly all of the above, so he's been on a roll.

But he lost those hard-fought gains in a New York day. The seven state wins had helped Mr Sanders claw back 65 delegates from Mrs Clinton's lead, but in New York she pulled a net gain of 69 delegates, wiping out all his recent gains.

And her support base has a demographic spread that looks almost exactly like the demographics of the national Democratic party. Mr Sander's supporter demographics are a much narrower base.

After that, Mrs Clinton will likely have effectively shut Mr Sanders out of the race - not that he'll give up anytime soon. And Mr Trump will have piled on a fair few more delegates - whether it will be enough is anyone's guess.