The search for survivors has intensified after yesterday's major earthquake in Japan, where at least 250,000 people ordered from their homes amid fears of further quakes. 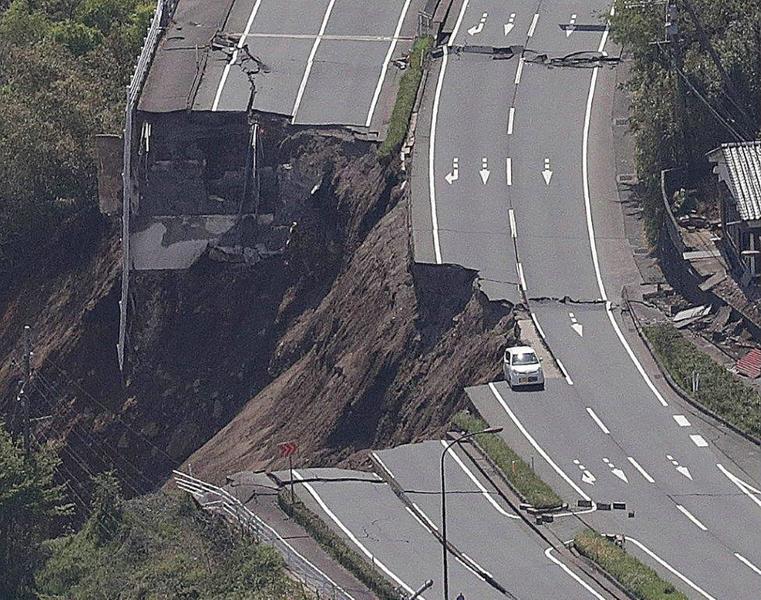 An aerial view shows a collapsed road after an earthquake in Minami-Aso, Kumamoto prefecture. 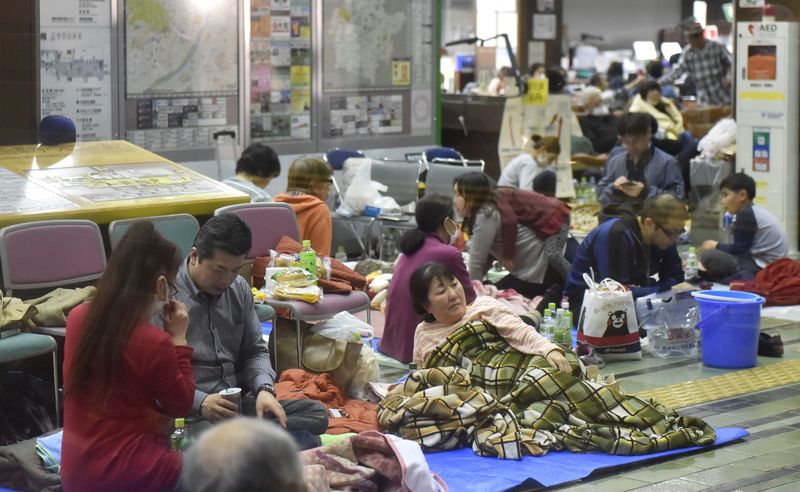 Evacuees rest at an entrance of the Kumamoto City Hall. Photo:AFP 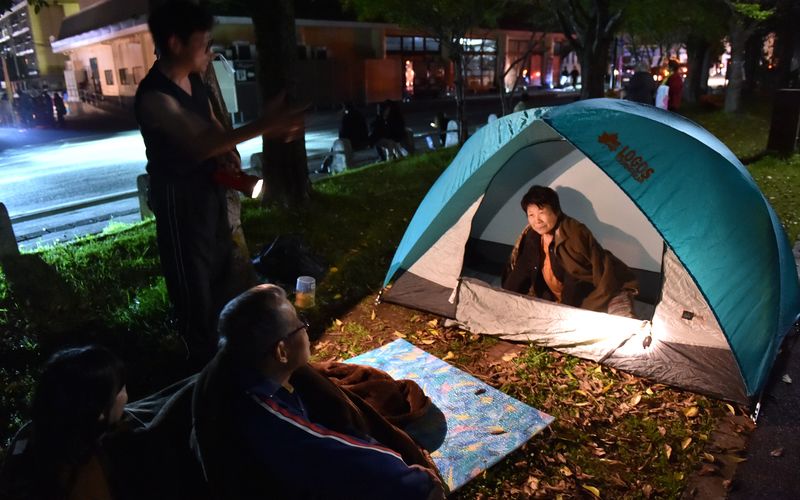 Evactuated residents wait at a park in Higashi-ku in Kumamoto City. Photo: AFP 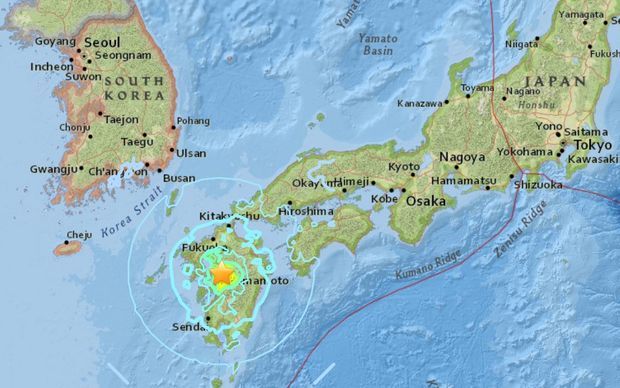 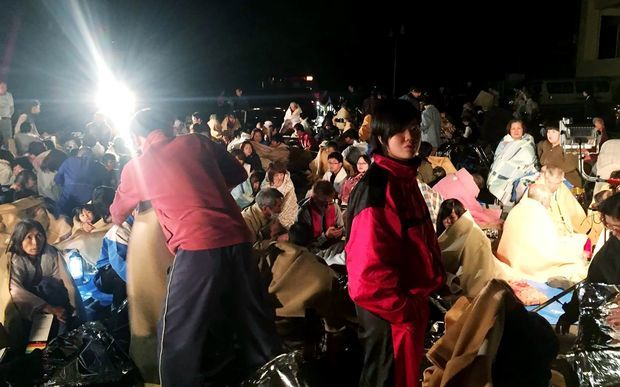 People gather outside the Mashiki town hall after the 6.2 quake. Photo: AFP 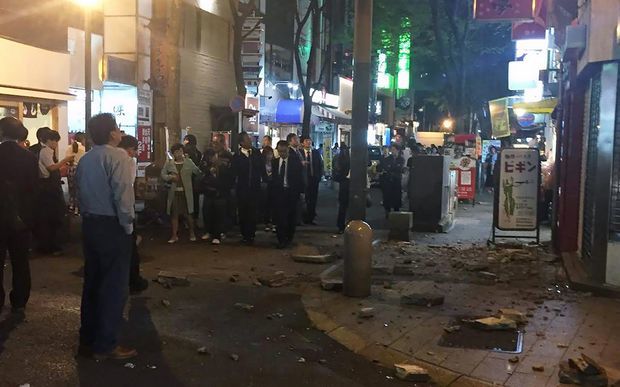 Residents stand on the street following an earthquake in Kumamoto city on April 14, 2016. Photo: AFP 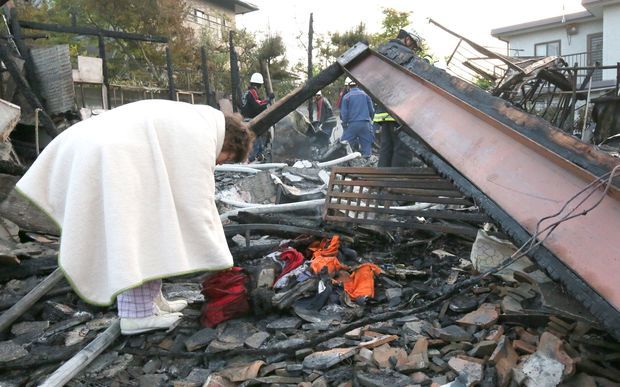 A house that burned down after a massive quake in Masaki, Japan. Photo: AFP 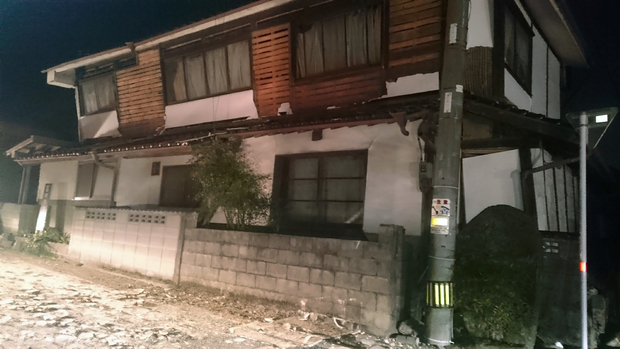 A house tilted and damaged in Kumamoto city. Photo: AFP 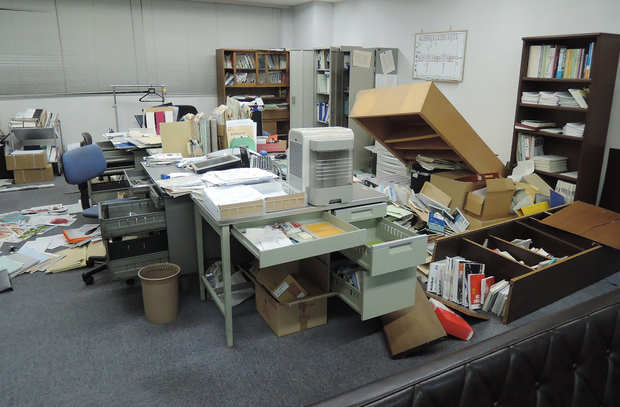 An offfice in Kumamoto following the quake. Photo: AFP 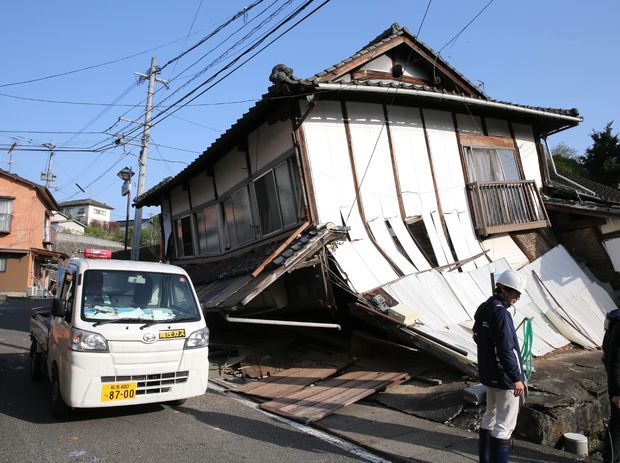 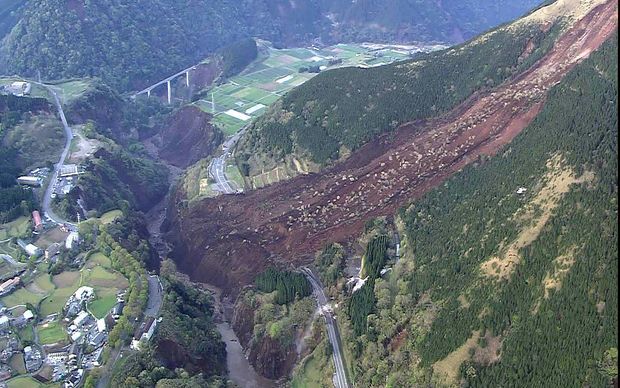 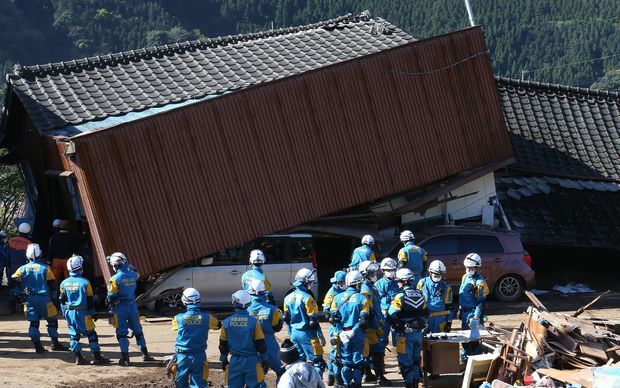 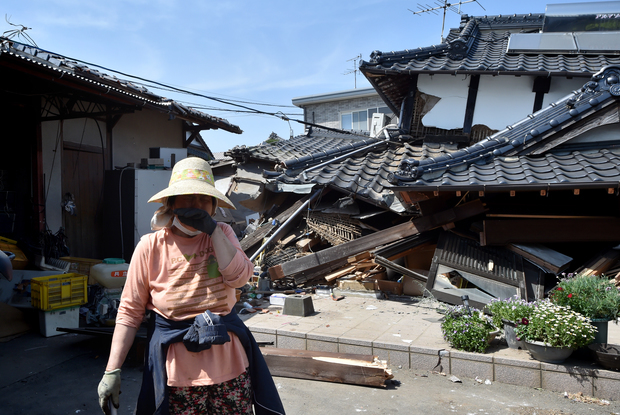 A woman stands in front of her damaged house in Mashiki, Kumamoto prefecture after a 6.5 magnitude quake struck the southwestern island of Kyushu on April 14. Photo: AFP

The 7.3 magnitude tremor in Kumamoto province killed at least 41 people, and caused widespread damage to houses, roads and bridges.

It was the second major quake to hit Kumamoto province on the island of Kyushu in just over 24 hours. The first, late on Thursday, killed nine people.

Rescuers on Sunday searched for dozens of people feared trapped or buried alive, while survivors queued for scarce supplies of food and water.

Factories for companies including Sony, Honda and Toyota halted production as they assessed damage in the region, an important manufacturing hub in Japan's south.

In the village of Minamiaso, eight people remain "out of contact", said public broadcaster NHK. Rescuers pulled 10 students out of a collapsed university apartment in the town on Saturday.

Overnight, rescuers digging with their bare hands dragged some elderly survivors, still in their pyjamas, out of the rubble and onto makeshift stretchers made of tatami mats.

"The Self Defense Force, police and firefighters have been working to rescue people but there are still missing people," Prime Minister Shinzo Abe told reporters.

"The government will further deploy all possible means by expanding the troop size to 25,000," he said, adding he had accepted a US offer of help with air transportation in the rescue efforts.

Three nuclear plants in the region were unaffected by the quake, but factories supplying tech and auto parts to companies like Sony Corp, Toyota Motor Corp and Nissan Motor Co Ltd were shut to assess any damage.

Heavy rains fuelled worries of more landslides and with hundreds of aftershocks and fears of more quakes, thousands spent the night in evacuation centres. Firefighters handed out tarpaulins to residents so they could cover damaged roofs, but many homes were simply deserted.

The indiscriminate nature of the destruction saw some houses reduced to piles of splintered timber and smashed roof tiles while neighbouring homes were left standing.

"I felt strong shaking at first, then I was thrown about like I was in a washing machine," said a Tokai University student who remains isolated in the village of Minamiaso.

About 422,000 households were without water and 100,000 without electricity, the government said.

NHK said around 240,000 people had received evacuation orders across the affected region amid fears of landslides.

Troops set up tents for evacuees and water trucks were being sent to the area while television footage showed people stranded after the fall of a bridge being rescued by helicopters.

The National Police Agency said 32 people had been confirmed dead in Saturday's quake. The government said about 190 of those injured were in a serious condition.

On the other side of the Pacific, Ecuador was also struggling with the aftermath of a major 7.8 quake which hit on Saturday, killing at least 28 people and sparking a tsunami warning.

Both Japan and Ecuador are on the seismically active "ring of fire" around the Pacific Ocean.

A magnitude 9 quake in March 2011 north of Tokyo touched off a massive tsunami and nuclear meltdowns at Fukushima, contaminating water, food and air for miles around. Nearly 20,000 people were killed in the tsunami.

The epicentre of Saturday's quake was near the city of Kumamoto and measured at a shallow depth of 10km, the United States Geological Survey (USGS) said. The shallower a quake, the more likely it is to cause damage.

The city's 400-year-old Kumamoto Castle was badly damaged, with its walls breached after having withstood bombardment and fire in its four centuries of existence.

Bank of Japan Governor Haruhiko Kuroda, speaking at a G20 event in Washington, said it was too early to assess the economic impact but bank operations in Kumamoto were normal.

The USGS estimated there was a 72 percent likelihood of economic damage exceeding $10 billion, adding that it was too early to be specific. Major insurers are yet to release estimates.

Electronics giant Sony said a plant producing image sensors for smartphone makers would remain closed while it assessed the damage from the quakes. One of its major customers is Apple which uses the sensors in iPhones.