Rescuers are in a "race against time" to find survivors of a powerful earthquake amid forecasts of heavy rain and cold overnight, Japan's Prime Minister Shinzo Abe has warned. 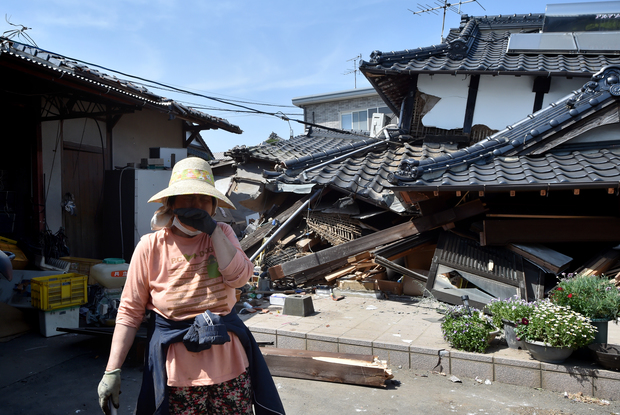 A woman stands in front of her damaged house in Mashiki, Kumamoto prefecture after a 6.5 magnitude quake struck the southwestern island of Kyushu on April 14. Photo: AFP

Mr Abe admitted rescue operations throughout the night in the Kyushu region "will be extremely difficult".

At least 32 people have been killed and hundreds injured, with thousands forced to seek refuge outdoors and dozens still feared trapped beneath rubble.

Both quakes were shallow and struck close to the city of Kumamoto, causing huge damage to roads, bridges, tunnels, homes and buildings.

Some 100,000 households remain without power while around 400,000 homes are without water.

Mr Abe told an emergency meeting on Saturday evening that the rain and winds had begun and "are expected to get stronger".

Saturday's magnitude 7.3 quake struck at 1.25 am local time, at a depth of 10 km closest to the city of Kumamoto, which had already been hit by a magnitude 6.4 quake on Thursday night.

Nearly 2000 people received hospital treatment. About 190 of the injured are in a serious condition, the government said.

There are many reports of people trapped inside buildings. Chief Cabinet Secretary Yoshihide Suga said rescue workers were aware of "multiple locations where people have been buried alive".

One village had to be evacuated after a dam collapsed as a result of the quake. 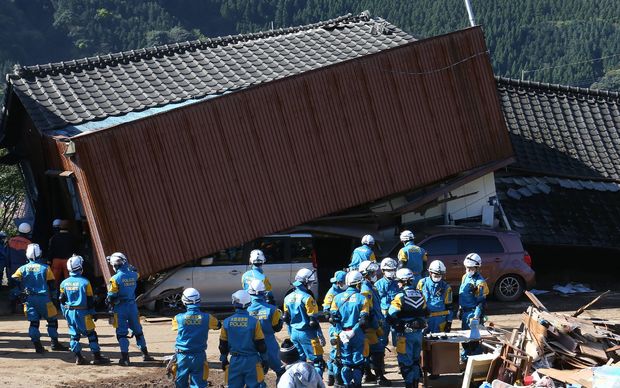 Some 20,000 troops were deployed to help police and firefighters in the rescue effort.

They have also been helping some of the 92,000 people who have been forced to evacuate their homes.

Thousands of people spent the first night on the streets and in parks - where they were huddled under blankets looking dazed and afraid.

They were urged to seek shelter with the approaching storm. Tents were being set up and tarpaulins handed out, along with food and water.

Chris Tempest was one of many to have left his flat for an evacuation centre in Kumamoto.

"We returned to our apartment but there is a huge mess. We are without running water, electricity and gas," he told the BBC.

"The mayor of the prefecture has told people to put out bucket and containers to catch rainwater to help."

Thursday's quake caused shaking at some places as intense as the huge earthquake that hit the country in 2011, Japan's seismology office said.

The 2011 quake sparked a huge tsunami and nuclear meltdown at the Fukushima power plant.

Most of those who died in Thursday's quake were in the town of Mashiki where an apartment building collapsed and many houses were damaged. 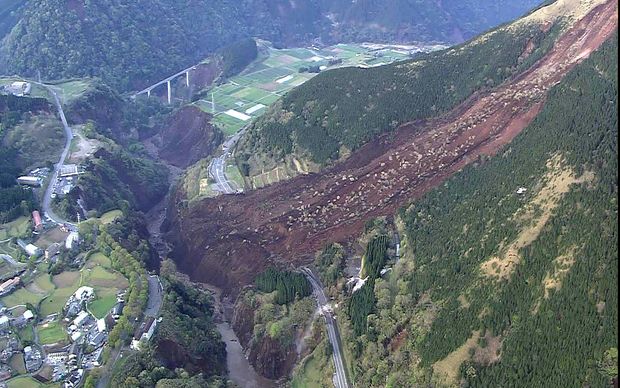 New Zealand's Japanese community say their thoughts are with those in the quake-stricken country.

The New Zealand-Japan Society of Auckland says it was devastated to hear of the second deadly earthquake to hit Southern Japan this week.

It's president, Stephen Duxfield, said some of its members had family or friends who live near the regions worst hit, but all had received word that they are safe.

Mr Duxfield said New Zealand and Japan shared close ties as the two nations had helped one another following the Christchurch earthquake and the Japanese tsunami of 2011.

He said his thoughts were with those affected by the latest quakes.

"We emphasise with them, we're certainly praying for those affected. We thought with the [first] earthquake that that would be perhaps be it and it would taper off from there with aftershocks, but then for the country to be hit again by another large earthquake is certainly scary," he said.

Mr Duxfield said he hoped the New Zealand government would step in to help Japan recover from the latest earthquakes if the country needed it.