After being walloped by Winston, Fiji has largely avoided another pounding from Zena this week, but Amos, Bart and Colin are on their way. 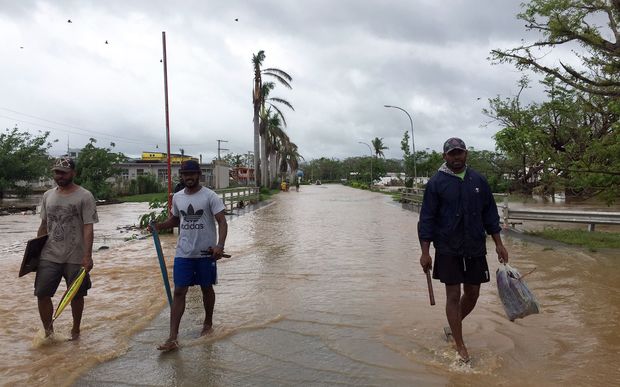 After days of heavy rainfall, which have flooded streets in Fiji's western division of Ba, a new cyclone is closing in. Photo: AFP

The business of naming topical cyclones is taken seriously, with the names needed for quick identification of storms in warning messages - names are easier to remember than numbers and technical terms.

In this part of the world, the tropical cyclone season traditionally runs from November to the end of April, with February and March being the peak months. Cyclone Zena is currently starting to die out near Tonga, while Cyclone Winston killed over 40 and caused major damage recently.

Names are used in alphabetical order, alternating male and female, and letters such as Q and X are occasionally skipped.

A name might also be skipped if it is deemed inappropriate for some reason, such as a similarly-named cyclone that is already active in the area, or if it is the name of a public figure currently in the news.

The list of names for all the regions are created by an international committee of the United Nations World Meteorological Organization (WMO), which also supplies new options when names are taken off the list, when a storm is so deadly or costly that the future use of its name would be inappropriate.

The WMO says names are also designed to make it easier for media to report on tropical cyclones, heighten interest in warnings and increase community preparedness.

The public do not get a say in what the tropical cyclones are named, although last year the Met Offices in the UK and Ireland ran a joint competition, asking the public for names for big storms.

Tropical cyclones are officially named by one of eleven warning centres around the globe, with Fiji and New Zealand sharing a list of the same names.

The Fiji Meteorological Service in Nadi names systems that located between the equator and 25°S, while MetService names systems - in conjunction with Nadi - that are located to the south of that area.

There are four lists - and one standby list - in the South Pacific region. This week's Zena is the final name on list C, with list D starting back at the beginning of the alphabet at Amos, followed by Bart, Colin, Donna and Ella.

More than 100 names have been retired in the South Pacific region since 1970, with names like Wendy, Rina, Charles, Gordon, Wallyn Nigel, William, Susan, Frank and Nancy no longer available to use.

The most recently retired name was Lusi, which caused more than $4 million in damage when it hit New Zealand in March, 2014. It was later replaced by Louise.

Cyclones do retain the same name if they cross a regional boundary - except in the Indian Ocean - or if they decay and then regenerate.

For centuries, storms were named arbitrarily, with some being named after the area they struck, or even boats that were damaged.

The modern practice of naming cyclones and hurricanes is generally credited to Australian meteorologist Clement Wragge, around the turn of the 20th century, but it fell out of use until it was revived in World War II for the Western Pacific.

The Australian and South Pacific region started giving women's names to the storms in 1964 and both men's and women's names in 1974/1975.

Names have caused controversy in some parts of the world, with cyclones that originated in the north Indian ocean only receiving names for the first time in 2004, with care needed to pick names in the ethnically diverse region that were neutral.

Eight countries in the region - Bangladesh, India, Maldives, Myanmar, Oman, Pakistan, Sri Lanka and Thailand - all contributed a set of names to the WMO.