Aviation experts are examining two black boxes from the FlyDubai flight that crashed in the southern Russian city of Rostov-on-Don, killing all 55 passengers and seven crew on board.

But officials say the cockpit voice and data recorders have been badly damaged and are unlikely to reveal much data. 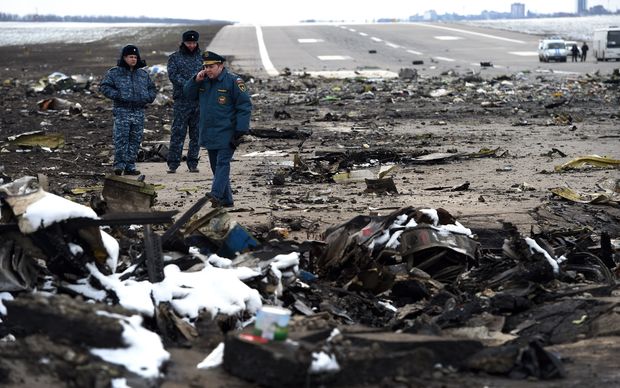 The scene of the crash at Rostov-on-Don Photo: AFP

The FlyDubai Boeing 737-800, coming from Dubai, missed the runway as it attempted to land on Saturday.

Officials say it is not clear what caused the crash 950km south of Moscow.

But poor visibility and high winds are being considered as factors. A criminal investigation has been launched into whether pilot error, a technical fault or the bad weather was the cause.

FlyDubai said the Cypriot pilot and Spanish co-pilot each had nearly 6000 hours of flying experience.

Inter-State Aviation Committee Deputy Chairman Sergei Zaiko was reported by AP to have told Russia's Channel One TV station that the black boxes containing flight data recorders were delivered to Moscow on Sunday.

But the committee that investigates plane crashes throughout much of the former Soviet Union said in a statement they had been badly damaged.

The black boxes are being examined by experts from Russia, the United Arab Emirates, the US and France, AP reported, because the American-made Boeing had French-manufactured engines. 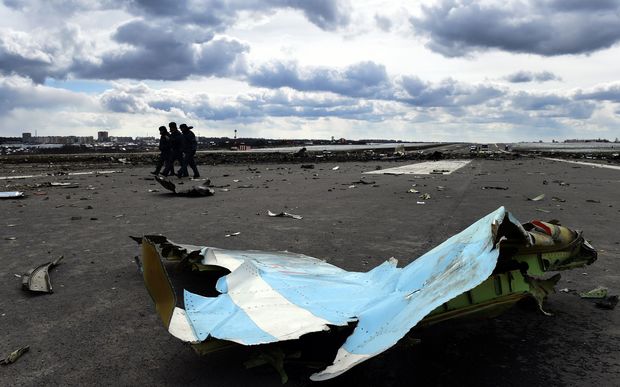 The scene of the crash at Rostov-on-Don Photo: AFP

Meanwhile, hundreds of people have congregated at the crash site to leave flowers, candles and toys in memory of those who were killed.

"I came to give remembrance to those who died. I am from Rostov myself and although I don't personally know those killed, a lot of names are well known, it's a small city," local resident Boris told the AFP news agency.

CCTV footage showed an explosion and a huge flash after the plane crashed and broke into pieces. The force of the crash left a huge crater in the runway with passengers' belongings and remains strewn over a wide area.

The airport at Rostov-on-Don remained closed on Sunday - but Transport Minister Maxim Sokolov said that it was likely to reopen on Monday once emergency teams had finished combing the area and repair teams had fixed the runway.

Reports say the plane abandoned its initial attempt to land and circled for two hours before crashing at the second attempt.

It came down about 250m short of the start of the runway.

About 700 rescue workers were sent to the site of the crash and the fire was extinguished, media reports said.

FlyDubai, a low cost carrier launched in 2009 with a hub in Dubai, operates flights to some 90 destinations.

Company Chairman Gaith al-Gaith insisted on Sunday that the airport "was good enough to operate and good enough" for landings.