Europe and Russia have launched a spacecraft in a joint mission to sniff out signs of life on Mars and bring humans a step closer to flying to the Red Planet. 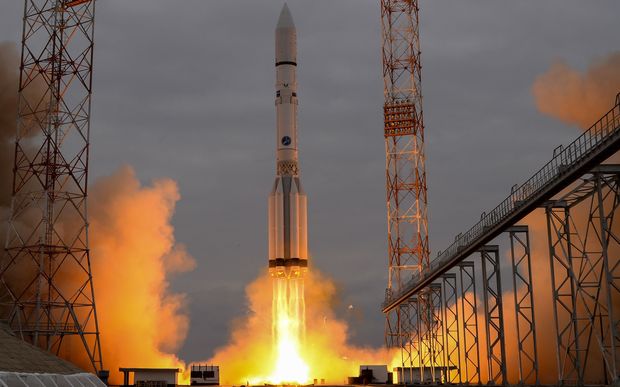 The ExoMars Trace Gas Orbiter (TGO) blasted off from a spaceport in Kazakhstan overnight (NZT) on board a Proton rocket, starting a seven-month journey through space.

The satellite will investigate whether the methane in Mars' atmosphere is coming from a geological source or is being produced by microbes.

If all goes well, the two space powers expect to follow up this venture with a rover, to be assembled in the UK, which will drill into the planet's surface.

It took several hours to put the TGO satellite on the right trajectory to go to Mars.

A series of engine burns by the rocket's Breeze upper-stage are required to build up the velocity needed to break free of Earth's gravity.

By early this morning, there was confirmation that three of these firings had occurred, with one last effort still scheduled.

The flight sequence has strained the nerves of space agency officials, with many anxious but excited conversations during the day at the European Space Agency's mission operations centre in Darmstadt, Germany.

For Russia especially, the Red Planet represents a destination of wretched fortune.

It has previously launched 19 missions to the fourth planet from the sun, and most of those were outright failures.

Many could not get off the pad cleanly; others simply stalled above the Earth and fell back down; a few crashed and burned at Mars or sailed straight past.

Satellite to be followed by rover

Assuming everything works out this time, controllers in Darmstadt can expect a first signal from the TGO after it is released on its way by the Breeze stage.

Three days out from its arrival, on 16 October, the satellite will eject a small landing module known as Schiaparelli.

Once on Mars' surface, the aim will be to operate a few science instruments but engineers are primarily interested to see how Schiaparelli performs during the entry, descent and touchdown.

In particular, the module will showcase a suite of technologies - radar, computers and their algorithms - that will be needed to put a later, British-built rover safely on the planet.

This second step in the joint European-Russian project is supposed to leave Earth in 2018, although this is now looking increasingly doubtful because of funding and scheduling issues.

Many connected with ExoMars were talking about 2020 as being a more realistic launch date.

The search for methane

None of this affects the TGO mission, however. After it has dropped off Schiaparelli, the satellite will spend the better part of a year manoeuvring itself into a 400km-high circular orbit above Mars.

From this vantage point, the orbiter's state-of-the-art instruments will then make a detailed inventory of Mars' atmospheric gases.

Methane is the key interest. Previous observations - by satellite, Earth-based telescopes and American rover Curiosity on the surface of the planet - found hydrocarbon was present in very low concentrations, at just a few parts per billion by volume.

That it was there at all was surprising. Ultraviolet light should have removed the gas from the atmosphere within a few hundred years, which suggested it must be replenished somehow.

One possible active source involves geological activity at depth, where water could be reacting with rock minerals to produce hydrogen, which is then further processed into methane.

Another tantalising prospect is that the source is biological in origin.

Most of the methane in Earth's atmosphere comes from microbes, like those in the stomachs of ruminants.

There are no cows on Mars, but simple organisms could conceivably be operating just below the surface of the planet.

The TGO's measurements should throw some light on these competing ideas.