Turkey's president is promising a relentless fight against terrorism after a car bomb killed at least 34 people in the centre of Ankara. 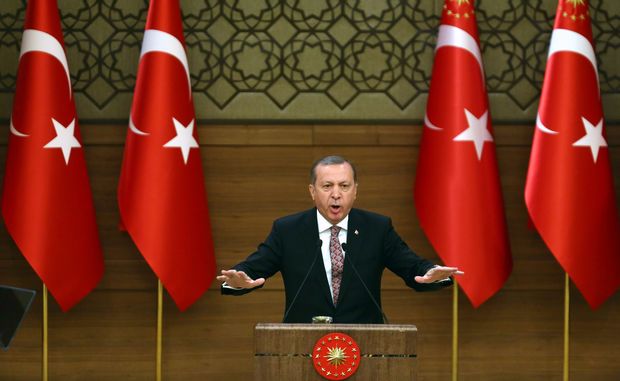 It's the third such attack in the capital in recent months.

President Recep Tayyip Erdogan said the suicide car bomb would serve only to strengthen the resolve of Turkey's security forces.

The blast in the key transport hub of Guven Park injured more than 100. At least one suspected bomber also died.

Mr Larsen was about 20 metres from the BMW car when the bomb exploded, and Ms Bishop said he was able to give her a first-hand description of the horror.

She said he was "somewhat shaken but focused on doing his job".

The police said there were two attackers, a man and a woman whose severed hand was found 300 metres from the blast site.

Turkish planes bombed targets in Iraq of the Kurdish rebel PKK, which officials suspected was behind the attack.

Eleven warplanes carried out air strikes on 18 targets including ammunition dumps and shelters, the army said.

No group had admitted carrying out the Ankara attack, but government sources cast suspicion on the outlawed PKK (Kurdistan Workers Party).

Interior Minister Efkan Ala said an investigation would conclude on Monday and those responsible would be named. 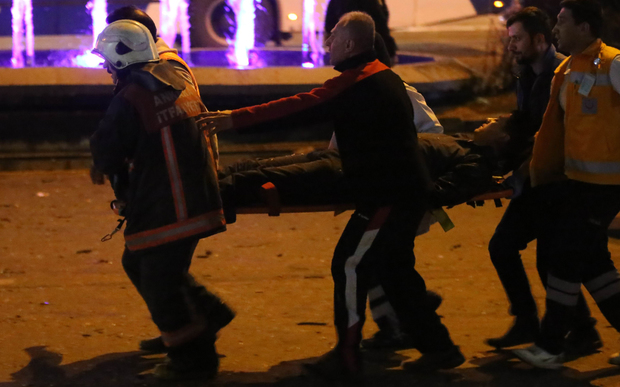 Police carry away one of the injured after a deadly explosion in the Turkish capital on 14 March 2016 (NZT). Photo: AFP

Kurdish rebels carried out a series of attacks on Turkish soil in recent months, and security forces raided Kurdish areas after a ceasefire ended last year.

Turkey was part of the US-led coalition against IS and allows coalition planes to use its air base at Incirlik for raids on Iraq and Syria.

It also had been carrying out a campaign of bombardment against Syrian Kurdish fighters of the People's Protection Units (YPG), which it regarded as a extension of the PKK.

Mr Erdogan said terror groups were targeting civilians because they were losing the battle against Turkish security forces.

Calling for national unity, he said Turkey would use its right to self-defence to prevent future attacks.

According to Turkey's state-run news agency, Prime Minister Ahmet Davutoglu has postponed a visit to Jordan following the bombing.

The United States condemned the attack. 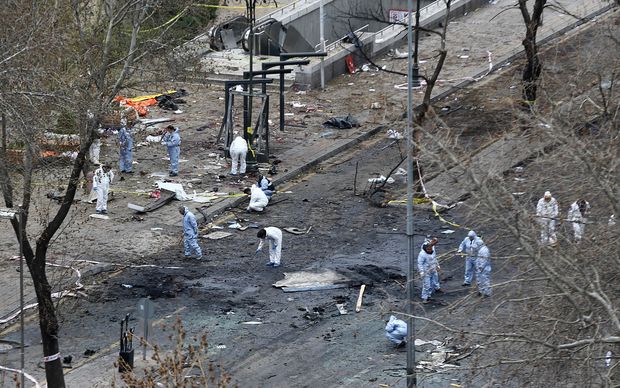 Forensic experts investigate the scene the day after a suicide car bomb in central Ankara killed at least 34 people and wounded 125. Photo: AFP

"We reaffirm our strong partnership with our Nato ally Turkey in combating the shared threat of terrorism," US State Department spokesman John Kirby said.

Nato Secretary-General Jens Stoltenberg also condemned the attack, saying there was "no justification for such heinous acts of violence".

The Peoples' Democratic Party (HDP) said it shared "the huge pain felt along with our citizens".

The HDP is frequently accused of being the political wing of the PKK, an accusation it denies.

It also denies not speaking out against PKK violence.

The blast happened about 18:40 on Sunday [5:40am Monday New Zealand time] and the area was evacuated in case of a second attack.

Turkish Health Minister Mehmet Muezzinoglu told a news conference 30 people were killed at the scene and seven died later in hospital. At least one of the dead was believed to be an attacker.

Mr Muezzinoglu said more than 100 people were being treated at several hospitals in Ankara, of whom at least 15 were in a critical condition.

That bombing was claimed by a Kurdish militant group, the Kurdistan Freedom Hawks (TAK).

It said on its website the attack was in retaliation for the policies of President Erdogan.

Turkey, however, blamed a Syrian national who was a member of the YPG.

Last October, more than 100 people were killed in a double-suicide bombing at a Kurdish peace rally in Ankara.

The BBC's Mark Lowen in Istanbul said three attacks in the Turkish capital in less than six months showed the multiple threats that Turkey now faced, and there would be serious questions about the government's ability to maintain security.

The country, which had been the stable corner of the Middle East and the West's crucial ally in a volatile region, was at a dangerous moment, he said.

Government sources are pointing the finger at Kurdish rebels, but Turkey has also been hit by the Islamic State group.