A suicide bomb attack has killed 10 people in the historic centre of Istanbul, all of them foreigners.

All of those killed in Sultanahmet square, near the Blue Mosque and Hagia Sophia - major tourist sites in the centre of one of the world's most visited cities - were foreigners. Officials said nine were German tourists. 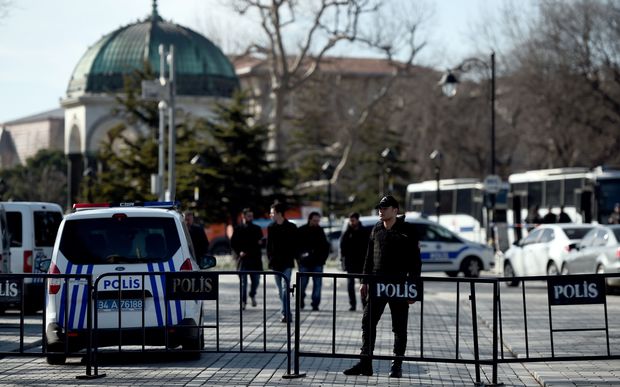 The blast was heard in districts of Istanbul several kilometres away, residents said. Television footage showed a police car which appeared to have been overturned by the force of the blast.

Tourist sites including the Hagia Sophia and nearby Basilica Cistern were closed on the governor's orders.

Deputy Prime Minister Numan Kurtulmus said the bomber was believed to have recently entered Turkey from Syria but was not on Turkey's watch list of suspected militants. He said earlier that the bomber had been identified from remains at the scene and was thought to be a Syrian born in 1988.

Mr Davutoglu said he had spoken by phone with German Chancellor Angela Merkel to offer condolences and vowed Turkey's fight against Islamic State, at home and as part of the US-led coalition, would continue.

President Recep Tayyip Erdogan said Turkey was the "top target for all terrorist groups in the region".

Norway's foreign ministry said one Norwegian man was injured and was being treated in hospital. The Dogan news agency said nine Germans and one Peruvian were also wounded.

Several bodies lay on the ground in the square, also known as the Hippodrome of Constantinople, in the immediate aftermath of the blast. It was not densely packed at the time of the explosion, according to a police officer working there, but small groups of tourists had been wandering around.

Turkey, a NATO member and candidate for accession to the European Union, is part of the US-led coalition against Islamic State fighters who have seized territory in neighbouring Syria and Iraq, some of it directly abutting Turkey.

There was no immediate claim of responsibility but Islamist, leftist and Kurdish militants, who are battling Ankara in southeast Turkey, have all carried out attacks in the past.

Just over a year ago, a female suicide bomber blew herself up at a police station for tourists off the same square, killing one officer. That attack was initially claimed by a far-left group, the DHKP-C, but officials later said it had been carried out by a woman with suspected Islamist militant links.