French police have shot dead a man who was apparently trying to attack a police station on the anniversary of the Charlie Hebdo attacks.

The suspect was carrying a meat cleaver and wearing a dummy suicide vest. 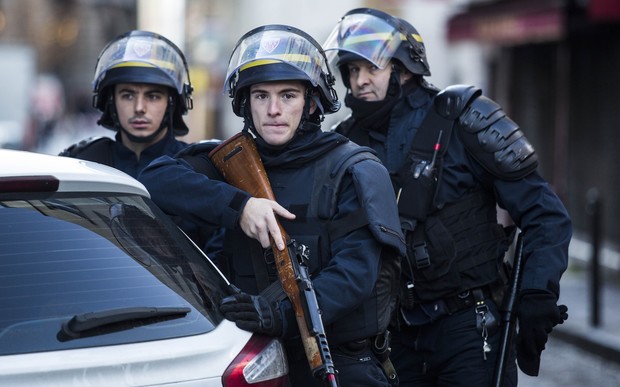 Armed police stand guard after knife-wielding man was shot dead on the anniversary of the Charlie Hebdo attacks. Photo: AFP

The man was later identified as a homeless man known as Sallah Ali, born in the Moroccan city of Casablanca in 1995.

He was previously convicted of theft in 2013, a source close to the investigation said.

In his statement, Paris Prosecutor Francois Molins said a terrorism inquiry had been opened into the incident, which occurred in the 18th district of the capital, an area IS said it had planned to strike in November.

"[The man] shouted 'Allahu Akbar' and had wires protruding from his clothes. That's why the police officer opened fire," said a police official.

Journalist Anna Polony posted photos on social media that appeared to show a body next to a bomb-disposal robot.

Ms Polony said that her sister, who was in her flat with her, saw the incident happen, adding that man started running towards police before he was shot.

French officials said the suspect, who was wielding the butcher's knife, shouted "Allahu Akbar!" (God is Great) outside a police station in Goutte d'Or, near Montmartre, before police shot and killed him.

A piece of paper with an Islamic State flag and a claim for the attack written in Arabic was found on his body.

Bomb disposal experts were brought in after wires were seen extending from his body, but officials later said a belt he was wearing did not contain any explosives.

Anti-terror police and French intelligence services are treating the incident as a case of attempted murder.

Following the attack, a cordon was been set up around the area, and security was boosted at schools and on public transport networks in the city.

Correspondents said the time of the attempted attack - 11:30 local time - is potentially significant as this was the same time that two gunmen launched their massacre at Charlie Hebdo's offices exactly one year ago.

The three attackers were shot dead by police, but questions remain about their jihadist contacts and possible accomplices in the Middle East.

Minutes before the most recent incident, President Francois Hollande had praised police in a speech commemorating the January 2015 Paris killings, when gunmen murdered 17 people in a series of attacks, including at Charlie Hebdo magazine and a Jewish supermarket.

In his address, Mr Hollande said 5000 extra police and gendarmes would be added to existing forces by 2017 in an "unprecedented" strengthening of French security.

He said the officers had "died so that we could live in freedom".

But with France also still mourning the deaths of 130 people injihadist attacks in Paris in November, he also used his speech to call for greater co-operation between the security services. 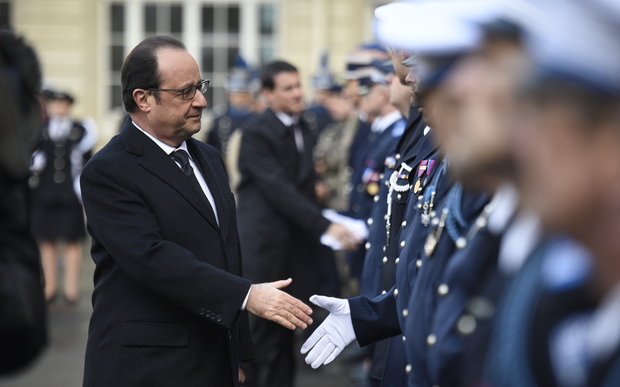 In addition to the 5000 extra police officers, 2000 extra jobs are being created in the intelligence services.

Since a state of emergency was imposed on the night of 13 November, police have brought to light 25 offences related to terrorism, he added.

"Faced with these adversaries, it is essential that every service - police, gendarmerie, intelligence, military - work in perfect harmony."

President Hollande said the rules for police use of firearms were also being revised, so that gunmen could be tackled more effectively.

Earlier, Parisians laid flowers and lit candles at the former office of Charlie Hebdo magazine, where a plaque was unveiled on Tuesday.

A second plaque was installed where a police officer was shot, and a third at the Jewish supermarket. 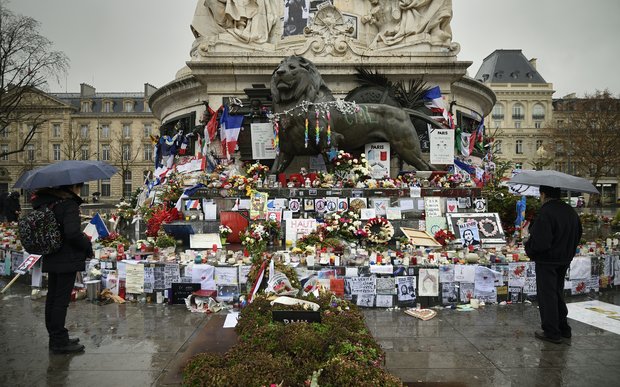 A make-shift memorial erected to honour the victims of the January 2015 attacks in Paris. Photo: AFP

On Saturday, a fourth plaque will be unveiled in the southern suburb of Montrouge, where one of the gunmen shot dead a policewoman.

The commemorations will culminate in a public event on Sunday in the Place de la Republique, where Parisians gathered in the wake of the attacks.

A 35ft (10m) oak "remembrance tree" will be planted in the square and veteran French musician Johnny Hallyday will perform Un Dimanche de Janvier (One January Sunday), a song recalling the vast march in Paris that followed the attacks.