Three foreign tourists have been injured after attackers stormed into a hotel in the Egyptian Red Sea resort of Hurghada. 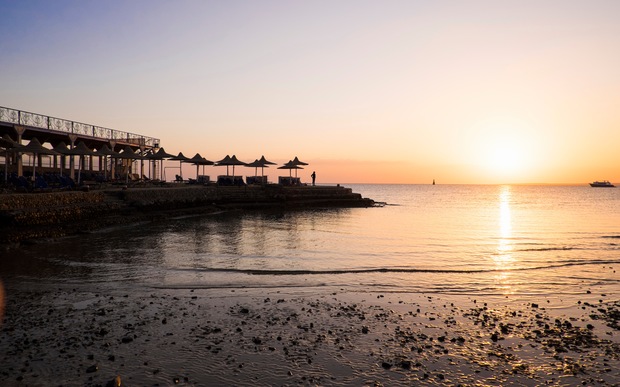 The two attackers were killed by security forces at the four-star Bella Vista hotel.

The tourists - whose nationalities are not yet known - were stabbed but their wounds are not serious.

The assailants were aiming to kidnap tourists and one wore an explosive belt, Egyptian officials said.

Journalist Sally Nabil in Cairo said Hurghada remained on high alert with all roads in and out closed off. Police forces were still searching for possible further attackers, she said.

Egypt is battling Islamist militants based in the nearby Sinai peninsula, including an Islamic State affiliate.

That group said it downed a Russian plane which crashed in October 2015, with the loss of 224 lives.

A spokesman for the UK Foreign Office said they were "urgently investigating" the reports from Hurghada.

He did not know whether any Britons might be affected.

It was the latest incident in a growing list of sporadic terrorist attacks carried out by jihadist fanatics, aimed at harming the government and driving away much-needed foreign investment and tourism.

The most potent threat emanated from the Egyptian affiliate of the so-called Islamic State, based in the northern Sinai Peninsula across the Red Sea from where Friday's hotel attack took place.

But ever since bombers attacked the resort of Sharm el-Sheikh in 2005 the authorities have gone to great lengths to secure the country's Red Sea resorts.

Until last October's downing of a Russian passenger plane - which Russia and Britain believe was caused by a bomb - the coastal resorts had remained largely free from terrorism for years.

Egypt was able to deal swiftly and effectively with this latest attack in Hurghada but the authorities will want to establish where it was launched from and what further precautions they now need to take.

An attack on a bus at a hotel near the Giza pyramids on Thursday was claimed by IS, which said it was targeting "a tourist bus carrying Jews".

Egyptian officials said no-one was hurt in the attack, near Cairo. Arab Israeli tourists were staying at the hotel, reports said.

After the Russian plane crashed in the Sinai peninsula on 31 October, the UK and other European countries halted flights to Sharm el-Sheikh, citing security fears.

The departures board on Hurghada airport's website shows foreign tourists travelling to the resort this week have come from Turkey, Germany, Sweden and the UK.