Thousands of people have gathered in the centre of Turkey's capital, Ankara, to pay tribute to the victims of bomb blasts which killed at least 95 people.

Brief scuffles broke out between the crowd and police after some mourners tried to lay flowers at the site of the bombings. 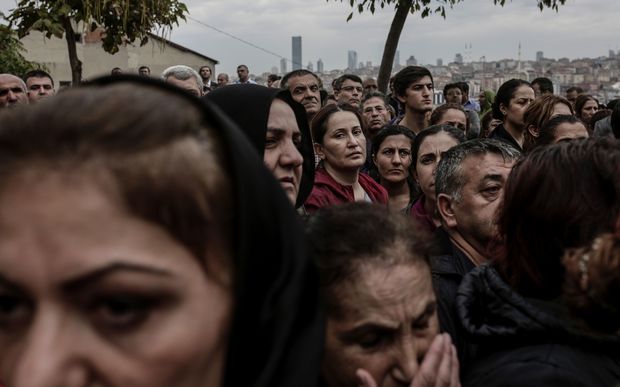 The pro-Kurdish HDP party, which organised Saturday's rally, said 128 people were killed in the attacks.

Protesters have blamed the government for security failures around the rally.

The government has rejected suggestions that it was to blame for the bombing.

Prime Minister Ahmet Davutoglu said there was evidence that two suicide bombers had carried out the attack.

Turkey declared three days of mourning after Saturday's attack, the deadliest ever in Turkey.

No group has said it carried out the attack, but Mr Davutoglu suggested that Kurdish rebels or the Islamic State (IS) group were to blame.

The blasts took place near the city's central train station as people gathered for a march organised by leftist groups demanding an end to the violence between the Kurdish separatist PKK militants and the Turkish government.

Amateur video footage showed a group of young people holding hands and singing, as the first blast hits. The explosions left 245 people injured, with 48 of them in a serious condition.

A ceasefire between the PKK and Turkey's government broke down after the attack in Suruc, with the PKK accusing the security forces of collaborating with IS.

This led to an increase in attacks from both sides over the summer.

On Saturday, in a move unconnected to the bombing, the PKK declared a unilateral ceasefire, calling on its fighters to halt its guerrilla activities in Turkey except in cases of self-defence.

A statement from an umbrella group that includes the PKK said its forces would "make no attempts to hinder or harm the exercise of a fair and equal election".

But on Sunday, the Turkish military said it had carried out air strikes against the PKK group, attacking targets in south-eastern Turkey as well as PKK positions in northern Iraq and killing 49 people.