The UN has expressed concern over a radical EU-Turkey plan to ease the refugee and migrant crisis, saying it could contravene international law. 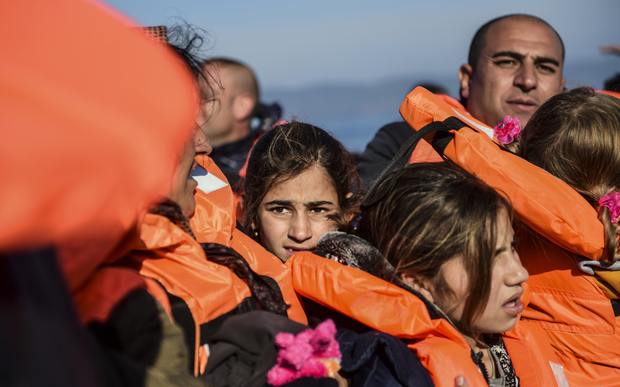 Migrants and refugees arrive on the Greek island of Lesbos after crossing the Aegean Sea from Turkey in November 2015. Photo: AFP

Refugee agency UNHCR said any collective expulsion of foreigners was "not consistent with European law".

Amnesty International called the plan a death blow to the right to seek asylum.

The deal, discussed at a summit in Brussels on Monday, has not been finalised and talks will continue ahead of an EU meeting on 17-18 March.

Europe is facing its biggest refugee crisis since World War II. Last year, more than a million people entered the EU illegally by boat, mainly going from Turkey to Greece.

Most of them were Syrian, fleeing the country's four-year civil war. Another 2.7 million Syrian refugees are currently in Turkey.

More on the refugee and migrant crisis

Meanwhile Slovenia has announced new restrictions for migrants - only those seeking asylum in the country or arriving for humanitarian reasons will be allowed entry.

The move means the Balkans route from Greece to Western Europe is "shutting down" to migrants, Slovenian Prime Minister Miro Cerar said.

In response Serbia, though which migrants transit on the way north to Slovenia and beyond, announced its own restrictions for migrants arriving at its borders.

The future of the Schengen agreement - which allows passport-free travel in a 26-nation zone - is already in doubt, given that eight of its members have introduced temporary border controls.

What's in the EU-Turkey proposal?

The EU heads said "bold moves" were needed, and made the following proposals:

European Council President Donald Tusk insisted the leaders at the summit had made a "breakthrough", and he was hopeful of concluding the deal in the next week.

However, German Chancellor Angela Merkel was more circumspect, saying: "It is a breakthrough if it becomes reality."

Vincent Cochetel, the UN's regional co-ordinator for the refugee crisis in Europe, said: "An agreement that would be tantamount to a blanket return of any foreigners to a third country is not consistent with European law."

Amnesty International said the plan was "wrought with moral and legal flaws".

Amnesty's Iverna McGowan said: "EU and Turkish leaders have sunk to a new low, effectively horse-trading away the rights and dignity of some of the world's most vulnerable people."

Turkey is also not a full member of the Geneva Convention, which could raise more legal questions.