The first Syrian refugees to enter New Zealand since the government announced it would take additional people have arrived in Wellington.

Refugee support services in Auckland and Wellington have been calling for more funding - and warning that Dunedin needs to start now to prepare for its own new arrivals in April.

The group of about 90 Syrians arrived in the capital city on Friday after spending the last six weeks at the refugee resettlement centre in Mangere.

They were welcomed by the Red Cross and members of the region's Syrian community.

The new arrivals will go to new homes in Porirua, Wellington City and Lower Hutt.

One of the group of about 80 Syrians who arrived last year, Nader Restom-Agha, said he was happy to be welcoming the newcomers to their community.

"There was no community to welcome us - and of course they are happy to see us and we are happy as well.

"We are ready to help them and support, and we can teach them things we learnt during the last year and help them settle and we can help them integrate into society."

He said he hoped the government could take more people.

"We wish the government could help us to get some of our relatives who are still in Syria suffering." 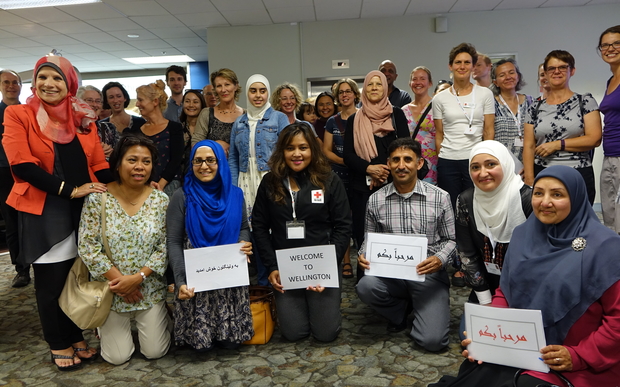 Another refugee who had already settled, Muna Al Naser, also said she wanted the government to allow more Syrians into New Zealand.

"I would like to thank the government for welcoming the new refugees and I would like them to bring some more refugees here as well - to do some family reunification, so that we could get some of our relatives here."

It was very challenging for to be away from her family, she said.

"I have two daughters in Syria and one in Lebanon and still have brothers and sisters, five of them, in Syria," Ms Al Naser said.

Two medical centres have agreed to take on the 23 new arrivals moving to the Hutt Valley.

Two other medical centres with many more refugees as patients have refused to take any of the Syrians, after rejecting an interim funding offer to cover the costs as totally inadequate.

The Hutt Valley District Health Board said practices in Naenae and Waiwhetu would enrol them, and the six families involved would also get free after-hours care while they settled in.

Labour Party leader Andrew Little said it was totally wrong that refugees' access to healthcare could be put in jeopardy.

"The government needs to explain exactly what has happened with the additional money that they said would be made available.

"It's bad enough that a lot of New Zealanders aren't getting access to the healthcare that they need but, having brought people into New Zealand at a time of crisis for them, we now don't seem to be able to provide the support and help that we had originally promised."

It was concerning that services were already under strain when only the first group of the emergency quota refugees had arrived, he said.

A free legal service has also warned it might have to turn away the new Syrian arrivals due to a lack of funding.

Meanwhile, the main refugee resettlement centre in Mangere has been told it will get extra funding to cover mental health services, after two extra intakes of Syrians since November.

Service provider Refugees as Survivors applied in September for more money to help the 600 additional refugees from Syria being accepted under the government's emergency quota, according to chief executive Ann Hood.

"I haven't actually seen any documentation, it's just been a phone call to say that it has been approved," she said.

Dr Hood said the new funding would allow them to employ more staff to provide the same level of service to the extra refugees.

"We would love more funding to enable us to do a more comprehensive program [but] this is enough to help us manage the extra quota numbers."

The demand for resources would only grow, she said.

"I know the refugee trauma recovery centre in Wellington are seeking additional funding.

"But then I think about Dunedin, and the next lot of Syrian people will go there - they are going to need extra resources because they haven't had refugees settled there previously. So there's definitely a need for increased resourcing."

Her organisation is based at the Mangere Refugee Resettlement Centre.

Looking ahead to Dunedin

Both Hutt Union Health and Petone Medical Centre - the two practices that have ruled out taking any more new refugees unless funding improves - said Dunedin's GPs should make sure there were definite funding plans in place.

Between 40 and 50 Syrian refugees are expected to arrive in Dunedin in April.

Hutt Union manager Sally Nicholl said it was a case of making sure district health boards stepped up.

"Dunedin should be sitting down and thinking really well now how they can provide the service and fund that service for refugees ... It's critical for really effective resettlement."

Petone Medical Centre practice manager Sally Stanley said it would not be fair on its existing patients, which included 80 refugees, to take on the newly arrived Syrians.

She said some of the $60,000 of interim funding offered last night by the primary health organisation Te Awakairangi, and which her centre rejected, was going to be siphoned off from long-term care patients such as diabetics.

"That's not new money, they're just asking us to re-label money that's already there," she said.

"We need to pay our refugee nurse to run a session a week, and the Ministry of Health, the DHB, they need to find money to do that. We just can't keep doing this, something's got to give."