REVIEW: Just days before Donald Trump could become the Republican Party's nominee for President of the United States, comedian John Oliver has laid into him. And he wants the politician to change his name.

"Our main story tonight, and I can not believe I'm saying this, is Donald Trump," says Oliver, before going on to explain how Trump could become the nominee, and that "it is no longer wise to ignore [him]."

The comedian then takes a closer look at Trump's campaign and claims, such as that he tells the truth, and is independent.

"I am not even sure he knows he's lying. I think he just doesn't care about what the the truth is."

So how many people around the world are secretly hoping Trump wins because it will be hilarious apart from the nuclear armageddon thing?

It’s funny… ever since this whole Trump thing started, no one in NZ has asked why I left the States.

While the segment is mocking of Trump, it makes the point that while Trump is marketing himself as a tough and savvy businessman, he has in fact had a string of failed businesses and has had no clear policy positions.

Part of his appeal is simply the Trump name, which Oliver wants to turn on its head. 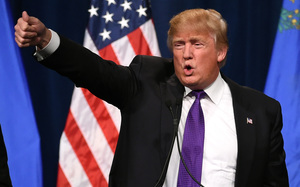 "He values his own name at three billion dollars. And I am not saying a name can't have value. It's why people will pay 120 dollars for a plain white t-shirt that is designed by Kanye West."

"He has spent decades turning his own name into a brand, synonymous with success and quality. And he has made himself the mascot for that brand....But if he is actually going to be the Republican nominee, it is time to stop thinking about the mascot, and start thinking of the man."

Super Tuesday is looming and the threat of Trump is stronger than ever, Vanity Fair says.

"Isn't it time we all stopped laughing," it asks.

John Oliver speaks truth the the myth that is Donald https://t.co/jwpr3r8JPH
Best 21 minutes of the primaries so far#MakeDonaldDrumpfAgain

And so, Oliver has a new approach to battling the politician. "The very name Trump is the cornerstone of his brand. If only there were a way to uncouple that magical word from the man he really is. Well guess what? There is."

Oliver finds a biographer who claims a "prescient ancestor" had changed the family's name from Drumpf. "It's the sound produced when a morbidly obese pigeon flies into the window of a foreclosed Old Navy."

"Drumpf is much more reflective of who he actually is," Oliver argues, before calling him a "litigious serial liar, with a string of broken business ventures and the support of a former Klan leader, who he can't decide whether or not to condemn."

The comedian has filed papers to trademark the word "Drumpf", has unveiled a campaign anthem, and an internet extension which will replace the word "Trump with Drumpf".

Trump's reaction? Well silence so far, but this tweet possibly sums it up.