Republican presidential candidate Donald Trump has easily won the US state of Nevada, cementing his lead in the race for the party's nomination. 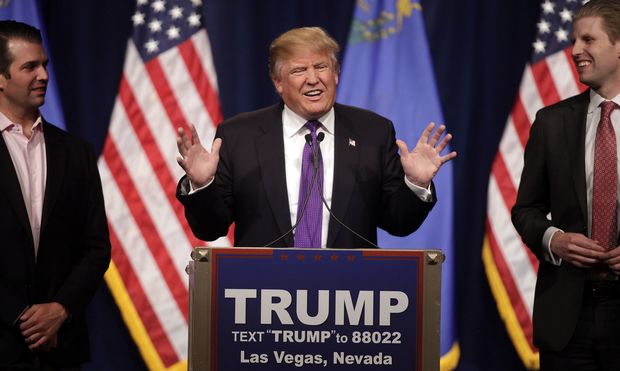 The Nevada win is the third in a row for Mr Trump in the state-by-state nominating contest for the November election, after victories in New Hampshire and South Carolina.

He also celebrated getting the support of the "poorly educated" and Latinos. Some 45% of Nevada's Republican voters of Latino origin backed Mr Trump, according to entrance polls.

Nevada, typically a swing state with a substantial Latino population, is crucial to the election process. Hillary Clinton won the state on Saturday in the Democratic race.

Mr Cruz and Mr Rubio had both set their sights on a strong second-place finish in Nevada in the hopes that a win over the other would provide important momentum ahead of the 12 nominating contests on 1 March, known as Super Tuesday.

With all votes counted, Donald Trump had 46 percent, his closest rival Marco Rubio 23 percent and Ted Cruz 21 percent. Retired neurosurgeon Ben Carson and Ohio Governor John Kasich, neither of whom had spent much time campaigning in Nevada, lagged behind with single-digit support.

Mr Rubio defended his second-place finish, calling it an "unusual year" and an "unusual process".

"The vast, overwhelming majority of Republicans do not want Donald Trump to be our nominee. As long as there are four people running, dividing up the non-Trump vote, you're going to get results like what you saw last night... so the sooner we can get this race narrowed down, I think the easier it's going to be to stop Donald Trump and defeat him."

In the US primary elections, candidates win delegates who pledge to endorse them at the party conventions in July.

Thirty delegates - about 1 percent of the total - were up for grabs in the Nevada caucuses, the first Republican test in the western United States. Donald Trump won 14 delegates; Marco Rubio seven and Ted Cruz six. John Kasich and Ben Carson each got one delegate, with one more still to be allocated.

To win the Republican nomination for president a candidate needs 1237 delegates. So far, Mr Trump has 81 and Mr Rubio and Mr Cruz have 17 each.