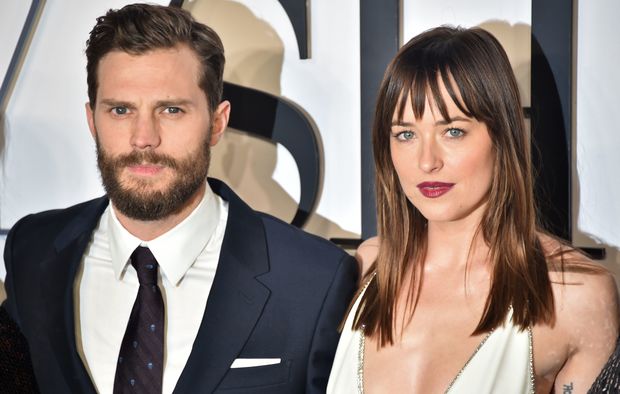 Jamie Dornan, left, and Dakota Johnson at the the UK Premiere of Fifty Shades of Grey. 12 February, 2015. Photo: AFP

The awards highlight the year's worst film, director and actor, amongst other awards.

He won the ignominious prize for Jupiter Ascending, a widely lambasted sci-fi flick from the Wachowski siblings.

The British star is up for another best actor Oscar this year for his role in The Danish Girl.

The reboot of the Fantastic Four franchise scored wins for worst director for Josh Trank and worst remake/rip-off or sequel.

The Razzies is a tongue-in-cheek award ceremony held in Los Angeles every year the day before the Academy Awards.

Organisers lampooned the nominees, voted for by the public, in a series of comedy sketches and show tunes.

There was also a Donald Trump impersonator, who highlighted the fact that the presidential hopeful was himself a Razzie winner in 1990 for playing himself in Ghosts Can't Do It.

There is always the anticipation that one of the stars would turn up to collect their award, but none had been brave enough since Sandra Bullock picked up hers in person in 2010.

Razzies founder John Wilson said he was full of admiration for how bad this year's crop of nominees were.

Speaking about Jupiter Ascending, he told BBC News: "It's an insane movie and the centre of the insanity is Eddie Redmayne (who) becomes emperor of the universe, and apparently he got there by over-acting.

"Of the five films that were nominated, Jupiter Ascending was the most entertainingly awful film."

Serial nominees Adam Sandler and Kevin James managed to dodge triumphing in any of their categories as Pixels and Paul Blart Mall Cop 2 left empty-handed.