The new Star Wars film has set a new opening night box office record in the US and Canada, industry experts said. 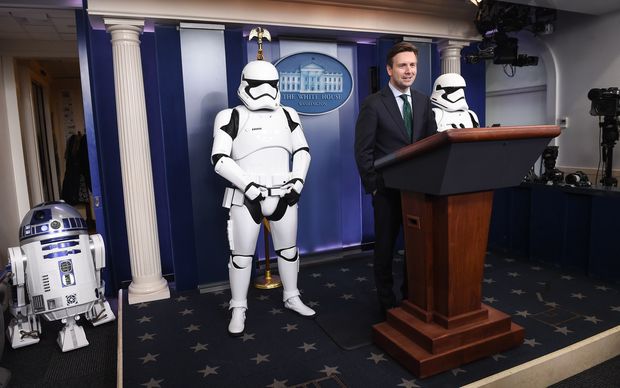 US Press Secretary Josh Earnest speaks to the press in the briefing room at the White House flanked by Star Wars characters R2D2 and Storm Troopers. Photo: AFP

Star Wars: The Force Awakens made $US57 million on Thursday night, beating the previous record of $43.5m held by Harry Potter And The Deathly Hallows: Part 2 in 2011.

Analysts say the space saga could become the biggest selling movie of all time.

The film also set a new opening day box office record in the UK and Ireland.

The £9.64m tally beat the previous best of £9.48m set by Harry Potter and the Deathly Hallows: Part 2. Midnight screenings on Thursday morning accounted for £2.4m of ticket sales. 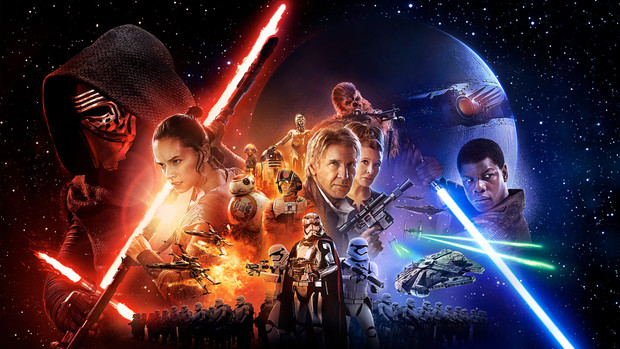 Two million tickets were booked in advance of The Force Awakens release, setting a new record for advanced ticket bookings in the UK and Ireland. Photo: Supplied

Rentrak's Paul Dergarabedian, one of Hollywood's best-known box office analysts, said the film's opening night performance in the US and Canada "portends a massive and potentially record-breaking opening day and weekend for the film".

"The potential for The Force Awakens to ultimately break into the $2bn club worldwide is certainly in the realm of possibility," he said.

"It might join the $2bn club worldwide, and maybe, just maybe, be the highest grossing film of all-time."

Analysts expect The Force Awakens to make about $200m in the US and Canada over its opening weekend, a total that could challenge the record Jurassic World set earlier this year.

The latest instalment in the dinosaur theme park franchise made almost $209m in its first three days on North American release in June.

In the UK, some chains have increased their prices for the film. Odeon, for example, has imposed a ticket surcharge of up to £2.

The same tactic, coupled with the decision to open the film on a Monday, enabled Spectre to set the record for the biggest opening ever at the UK and Ireland box office.

Analysts say The Force Awakens opened on Thursday so would have to perform staggeringly well over the weekend to top the latest James Bond's film's £41.3m debut, which was calculated over seven days as it opened on a Monday.

According to industry journal Screen International, though, such an outcome "remains a distinct possibility" given the film's current box office performance.

Skyfall, the previous James Bond film, is currently the highest-grossing film at the UK and Ireland box office, having made almost £103m domestically.

Two million tickets were booked in advance of The Force Awakens release, setting a new record for advanced ticket bookings in the UK and Ireland.

Directed by JJ Abrams, Star Wars: The Force Awakens returns to "a galaxy far, far away" some 30 years on from the action of 1983's Return of the Jedi.