Countries at the Paris climate change talks have given critical feedback on the latest draft of the deal. 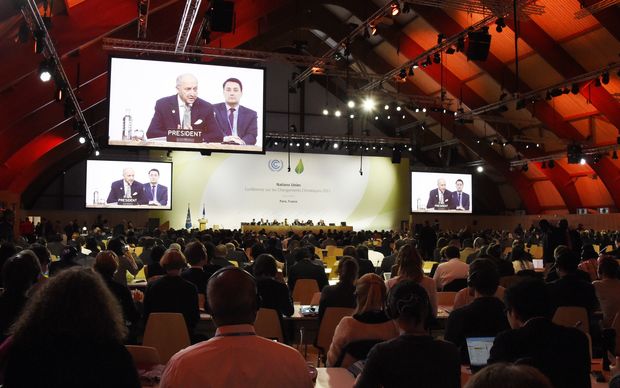 After some delay, the French president of the COP21 climate change conference, Laurent Fabius, released a shorter, cleaner version of the text on Wednesday afternoon local time.

At 29 pages, the new draft of the text was the shortest yet, and three-quarters of the square brackets, indicating sections to be resolved, had been removed.

Mr Fabius stressed it was not the final text and, while progress had been made, he said there was still a lot of work to do.

Countries considered the draft text for five hours, and gave feedback to the French presidency in an open session of the Paris committee.

Representing the umbrella group of which New Zealand was part, Australia's Peter Woolcott told the conference the draft text was not the ambitious agreement his group was seeking.

Many countries said the new text was now unbalanced, with Malaysia's team quipping the text was indeed balanced in that everybody was equally unhappy.

New Zealand's former climate change ambassador, Adrian Macey, said this stage of the negotiations was always going to get tricky, and the next few days would be crucial.

"We do need some sort of a crisis, a realisation that we haven't got there yet and there's very little time, so we need to do more, step it up in another way."

While some areas of the agreement are close to being settled, the big issues that have been constant through the fortnight-long conference remain the challenges for the coming days.

Mr Fabius said countries were near settlement on the wording on climate change adaptation which meant they could focus more on the disagreements over a mechanism to address the losses and damage caused by climate change.

He said there was still work to do on climate finance and differentiation, or working out the different responsibilities of developed and developing nations.

New Zealand Climate Change ambassador Jo Tyndall expected a bumpy road between now and the weekend, when it was hoped the final deal would be agreed.

"A lot of scurrying around in the corridors, of course, as people try to find out what other people are thinking, is this going to be hugely controversial when we all meet together or are people generally happy with where the French have pitched the text that they have put together?"

The French hosts have also decided to get parts of the text legally drafted as they are settled rather than wait for agreement on the whole text - a move intended to provide more time to negotiate.

The hosts plan to deliver another draft text in the early hours on Thursday.

The United Nations-set deadline for the deal to be settled is 6pm Friday (Paris time), but it is widely expected the conference will run over time.