Negotiators and ministers at the climate change talks in Paris are in back-to-back meetings, as the conference gets down to the business end of the fortnight. 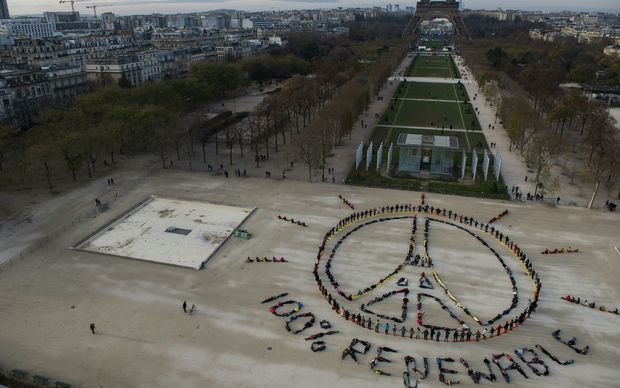 People make the "Pray for Paris" sign along with the slogan "100 percent renewable" in Paris on the sidelines of the COP21 climate change conference. Photo: AFP

Organisers of the United Nations Conference on Climate Change (COP21) want the deal handed to them by Wednesday night Paris time so it can be legally drafted, but negotiators on site are already saying that deadline is unlikely to be met.

UN Secretary-General Ban Ki-moon said everyone at the conference had a duty to heed the voices outside, and those of business leaders, mayors, the Pope and the millions of citizens internationally urging them to take action on climate change.

"Political momentum like that may not come again, I urge ministers and negotiators gathered here not to squander it. 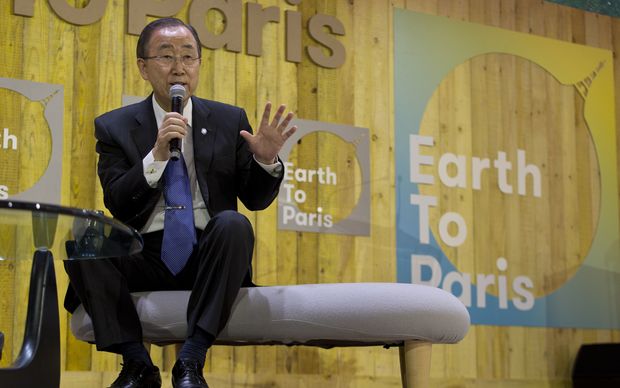 Mr Ban stressed the importance of a having a review written into the agreement and suggested it happen pre-2020.

The timing of a review into the commitments was a serious debate at the talks - some countries want it to happen before the agreement takes effect in 2020, as Mr Ban suggested, others wanted to wait until after 2020, and a few wanted no review at all.

New Zealand's climate change ambassador, Jo Tyndall, said New Zealand's preference at the moment was to have a review early in the 2020s.

She said it would be very difficult to get a pre-2020 review into the deal, particularly given how much work some countries had done to even come up with an emissions reduction target.

"To then turn around in a year or even two years, at the very same time they are likely to be ratifying this new agreement, and to say 'we know you went through a big effort domestically, but actually you can't join this agreement unless you put something more ambitious on the table'. I think that politically is going to be really really tough." 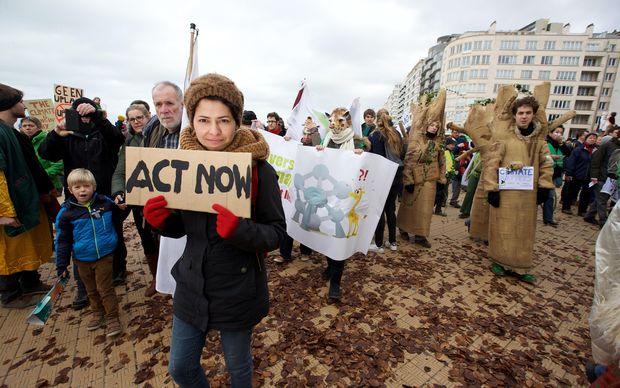 A woman holds up a sign as demonstrators gather for the 'Climate March' protest, during the COP21 United Nations Conference on Climate Change. Photo: AFP

While ministers were continuing to give national statements, the French presidency of COP21 organised the negotiators into smaller groups to tackle some of the tougher issues in the deal.

Ms Tyndall said her team of negotiators was pretty much going non-stop.

She said there was a strong desire from most countries to find some middle ground, and signals of where parties might be prepared to move.

"There is, however, a small group of countries that are clinging pretty strongly to their positions, that we see are very much at one extreme. They are not signalling readiness to move just yet and that I think is quite worrying."

The group Ms Tyndall was referring to was the 25-country strong Like Minded Developing Countries group - the most vocal of which have been Malaysia and Saudi Arabia.

She said the group was pushing its agenda very hard, but despite that she said the overall mood of the conference was still positive and optimistic.