Syrian activists say at least 26 civilians, including children, have been killed in the north-east of the country by air strikes possibly carried out by the US-led coalition. 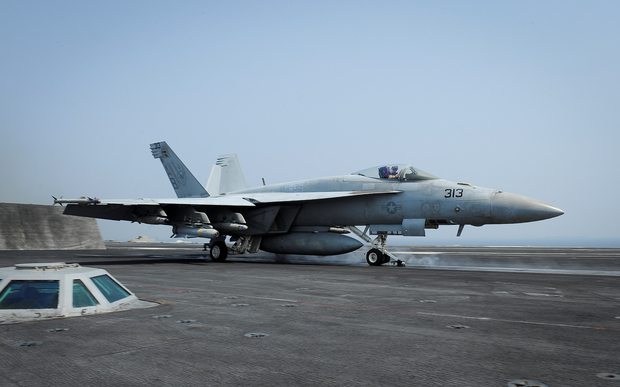 An F/A-18E Super Hornet launches on 21 August in the Gulf, as part of US operations in Iraq and Syria. Photo: AFP

The Syrian Observatory for Human Rights, a UK-based monitoring group, says the village of al-Khan, near al-Hawl in Hasakah province, was hit.

A US spokesman in Iraq said the reports would be looked into.

Separately, the Syrian government said three soldiers were killed in a strike.

The Syrian foreign ministry said coalition jets fired missiles at an army camp in Deir al-Zour province, which is largely controlled by the Islamic State (IS) group, and condemned what it called an act of "flagrant aggression".

However the US military insisted that the coalition had carried out no strikes in the area near the camp.

Responding to the later report that coalition air strikes may have killed civilians in the strike in Hasakah province, a spokesman said allegations were taken very "seriously", adding that if the information was deemed "credible", an investigation would be launched and the results released publicly.

That area has been the focus of fierce fighting in recent weeks between IS forces and Arab and Kurdish groups, backed by coalition air strikes.

The coalition has been targeting IS militants in Syria since September 2014, and does not co-ordinate its raids with the authorities in Damascus.

Russia has also been bombing IS and other opponents of President Bashar al-Assad since late September.

If coalition jets did hit the Syrian army camp - reported to be close to ground held by IS - it would be the first time such a thing is known to have happened since the US began air strikes in Syria, said the BBC's Jim Muir in Beirut.

The coalition has been stepping up its attacks in recent weeks on IS positions and oil installations in northern and eastern Syria. Broadening the scope brings with it a risk that unintended targets might be hit, the correspondent added.

Last week, the UK decided to participate in the air strikes in Syria, extending its existing bombing campaign against IS in Iraq.

The United Nations announced on Monday that it was seeking $US20.1 billion ($NZ30.2bn) to fund its humanitarian aid operations in 2016, with two-fifths earmarked for the Syria crisis.