An Australian man and his 12-year-old son were forced to lie on top of bloodied bodies at the Bataclan theatre in Paris when terrorists stormed a sold-out concert. 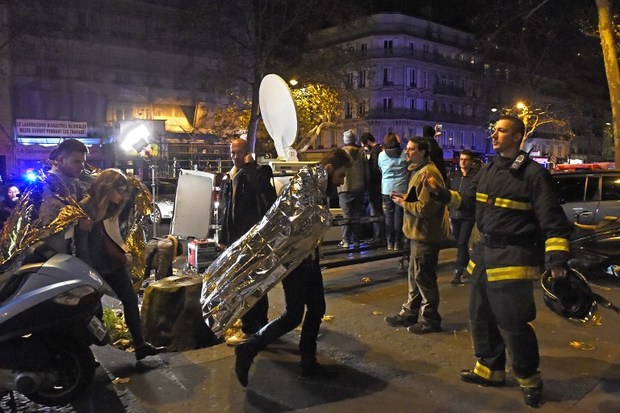 John Leader, 46, and Oscar had been inside the venue for 15 minutes, listening to American rock band Eagles of Death Metal, when he saw at least two terrorists enter the concert hall.

Mr Leader did not know that about 6km away in northern Paris, a suicide bomber had activated an explosive belt near the Stade de France, where a soccer game was being played between France and Germany.

It was the first in a series of terrorist attacks in the French capital that night.

The coordinated attacks, which began at 9:20pm (local time) and spanned a period of about three hours in five locations, left at least 129 people dead and more than 350 injured. At the Bataclan theatre, 89 people were killed.

In the dark, Mr Leader initially thought the gunfire noise was firecrackers. Soon the crowd realised an attack was taking place.

"It was a bit of a scramble," he told Hack. "Because we were next to the mixing desk, I got on top of Oscar and was pushing him towards the mixing desk.

"We managed to get around the right-hand side of the mixing desk and since it was dark we had no idea where these guys were."

The music had stopped before the lights came on. It was later reported the band had fled the venue by the stage door and a member of the band's crew was killed. 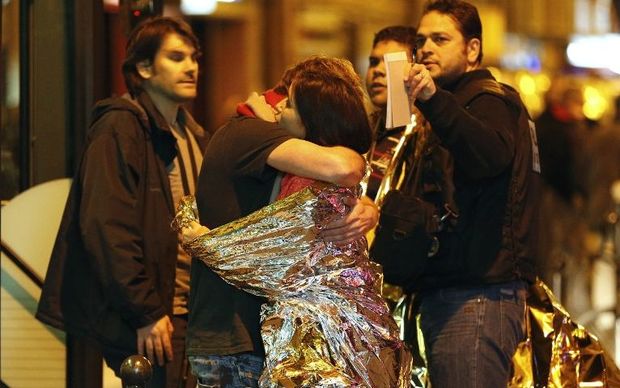 People hug each other before being evacuated by bus, near the Bataclan concert hall in central Paris. Photo: AFP

Two of the gunmen stood about 3m from the back wall and fired in the direction of the stage, Mr Leader said, hitting people whose bodies piled up at the front of the venue.

He said the terrorists wore "large brown sleeveless vests" that may have been made of leather, and appeared to be in their twenties.

He said they worked as a pair. One shot into the front of the venue while another covered the shooter to make sure nobody was able to approach. Only one at a time would fire, he said.

"They were very calm, very methodical, very slow. I watched the guy reloading. The person knew what he was doing. He wasn't panicking," he said.

"This was practised. They weren't in there shooting like in an American movie. At no point did they put the guns on full automatic. It was only semi automatic with pauses between the shots."

He said the gunmen were not firing at random.

Apart from the shooting, the venue was almost silent, Mr Leader said.

He said people were not calling out names. Moments earlier in the dark, people had been screaming, but as soon the house lights had lit up the room, people froze and fell silent, he said.

"It seemed to me very silent. There was a real sense of everybody merging into a silent and non-moving mass. It was very surreal . . . It was clear if you move you're dead."

Mr Leader and his son were hidden from view behind the audio mixing desk. It was a black sheet over metal scaffolding.

The sound man was crouched under the desk in full view of the gunmen. The man motioned for John and Oscar to stay where they were.

"Oscar moved back towards me . . . I told him to put his head down and said these guys are killers. When I looked at him he didn't seem to know if this was real or if this was a joke . . . I tried to rack my brains about how to get out of this."

Mr Leader said the mixing desk had "absolutely" saved their lives. When the lights had come on, many had been caught in the open, exposed to the gunmen.

They had tried to move towards the mixing desk. It was the only shelter in the room, apart from other bodies.

"People were piled up," Mr Leader said. "If you were at the bottom of a pile with two people on top you were probably a lot safer."

"At one point a young woman climbed over. She was in a more open position behind us. She climbed on top of us. We were on the edge of the desk and she curled on top of us, with her head still below the top of the desk."

Mr Leader said about 10 or 15 minutes passed and one of the gunmen made a short "diatribe" about Syria.

Other witnesses have reported the gunmen shouted "Allahu akbar" (God is greatest) as they attacked.

"It was obviously perfect French with no accent," said Mr Leader, who has lived and worked in Paris for 15 years.

"I knew this was to do with Syria. And I knew these guys had probably grown up in France because this was perfect French they were speaking." 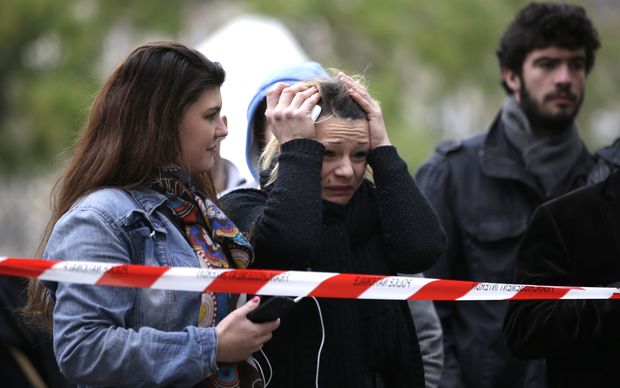 People gather at a cordon close to the Bataclan theatre where flowers and messages have been left the day after a series of attacks left dozens dead. Photo: AFP

'Bodies lay face down in pools of blood'

The firing stopped. Mr Leader heard someone say, in French, the men had gone. He could not see the shooters. People began stirring.

He and Oscar ran a diagonal route from near the back of the theatre to an open fire exit at the front of the venue.

It was only then they realised how many had died. Bodies lay face down in pools of blood at the foot of the stage. When they were close to the stage and about 5m from the stairs going down to the street the shooting started again.

"I got Oscar and pulled him flat on the floor. Unfortunately it was on top of the bodies and blood. He was trying to get up to the exit. I said 'get your head down'."

The firing stopped once more and the father and son ran down the stairs. Oscar lost his shoes.

"He said somebody was trying to hold on to him or something," Mr Leader said. "Somebody held his shoes and he ran out in his socks."

Mr Leader was out only seconds after Oscar but they had become separated. He could not find his son. There were 10-15 dead bodies in the street.

The injured were dragging themselves out. Others survivors were running away. He shouted Oscar's name up the street.

"He might have got hit on the stairs when he was coming out ahead of me," Mr Leader said. "I came back and had a peek in the doorway. He wasn't there."

Then the shooting started again. Mr Leader ran up the street. Terrified survivors were trying to take shelter inside apartment buildings.

The residents were shouting down the numbers of digital access codes to allow them to enter the lobbies of the buildings.

Inside the Bataclan, the shooting continued.

"To a large degree it was every man to himself at that point. People were trying to get space between them and these guys," he said.

About 100m from the Bataclan, Mr Leader remembered he could contact his son by phone.

Oscar answered on the second ring. He told his dad he had run down the stairs and fled up the street. He had not heard his dad shouting. He was safe and nearby. They arranged to meet at a metro station.

In the taxi home they passed the scene of another, separate terror attack, where a man had shot diners in the Petit Cambodge restaurant.

Later they heard news reports that police had stormed the Bataclan about 1:20am. Three attackers were killed.

"It was obviously a very harrowing experience. After two days we're starting to take the measure of what's happened," he said.

"For Oscar we're focusing on this not being a life defining event and being more of a mishap.

"I don't think we're in shock. We're in the denial phase. For me at the moment it was a rough Friday night. It hasn't sunk in how lucky we were."