Flights between Russia and Ukraine have stopped after the two countries exchanged sanctions against their airlines amid a standoff over Moscow's support of separatists in the east of Ukraine. 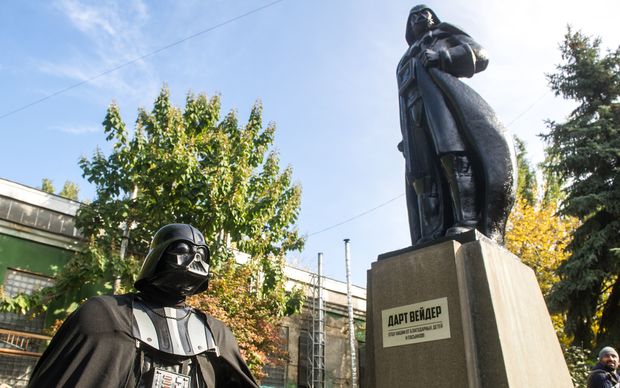 Ukrainians in Odessa have transformed a statue of Lenin into one of Darth Vader. Photo: AFP / Volodomyr Shuvayev

Kiev said last month it would ban direct flights by Russian airlines, including the flagship carrier Aeroflot, from 25 October to punish them for flying to Crimea, a peninsula Moscow annexed from Ukraine in 2014.

The Kremlin called the move "another act of madness" and swiftly responded by closing its airspace to Ukrainian airlines, also effective from today, although both sides said they were willing to talk about lifting the ban.

Ukrainian Infrastructure Minister Andriy Pyvovarsky said on Friday that consultations with Russian officials had been held in Brussels and would continue on Saturday.

Mr Pyvovarsky estimated that air passenger traffic between the two countries stood at 657,000 in the first half of 2015, with Russian airlines handling two-thirds of that.

Ukraine has accused Russia of sending arms and troops to help pro-Moscow separatists fighting its soldiers in the east of the country, in a conflict which has killed nearly 8000 people since April 2014.

Meanwhile, Ukrainians have transformed a statue of Lenin in Odessa into one of Darth Vader, a character from the Star Wars films and an oddly prominent figure in local politics.

"After the de-communisation law was adopted earlier this year, we had to decide what to do with the monument (of Lenin)," Oleksandr Milov, the new statue's sculptor, told AFP. "Honestly, I did not like the idea of destroying it, so we decided on a more flexible solution."

New elements were added to the original plaster statue without causing it any harm.

"The idea was obvious, since the Darth Vader movement has been at the centre of Ukrainians' attention in recent years," Milov said.

AFP reports that the Soviet founder - long despised by most in non-separatist parts of Ukraine - fell victim in April to a law that ordered the removal of all symbols and insignia reminding the country of its communist past.

A statue of Lenin in the heart of Kiev was toppled by enthusiastic protesters during the three-month revolution that ultimately ousted a Moscow-backed leadership in February 2014.

Symbols of Ukraine's Soviet past are also slowly disappearing across other parts of the country, although they are becoming more prominent in the pro-Russian separatist southeast.