Roman Catholic bishops have finished an often fractious synod on the family by reaching a compromise on divisive issues. 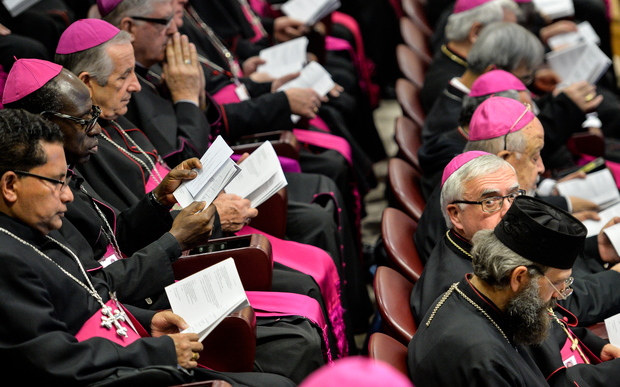 Bishops hold books as the Pope reads prayers at the morning session of the last day of the Synod on the Family at the Vatican. Photo: AFP

Doctrine towards divorcees has been softened but there is no change in the church's stance on homosexuality.

The church, he said, should confront difficult issues "fearlessly, without burying our heads in the sand".

At the synod, the name given to the meeting of Roman Catholic leaders, bishops voted on 94 articles dealing with how the church treats the family.

The most contentious, dealing with whether divorced and remarried believers should be allowed to play a full role in the church, only just passed.

The approved text calls for a case-by-case approach.

It also reiterated church teaching that homosexuals should not be discriminated against but said there were "absolutely no grounds" for gay marriage.

Pope Francis salutes as he leaves the morning session of the last day of the Synod on the Family at the Vatican Photo: AFP

In his summary of the three-week gathering, Pope Francis said he wanted it to be about "listening to and making heard the voices of the families".

But he said the synod had "laid bare the closed hearts which frequently hide even behind the Church's teachings or good intentions", remarks seen as an attack on conservatives.

He also acknowledged differences within the church, saying "what seems normal for a bishop on one continent is considered strange and almost scandalous for a bishop from another".

The text approved at the synod was only for guidance and Pope Francis must decide whether to advance it.

The opening of the synod was overshadowed by a row over a priest who announced he was in a gay relationship. He was later fired from his role at the Vatican.

The Vatican denied an Italian media report during the meeting that Pope Francis had a brain tumour, calling it "seriously irresponsible".