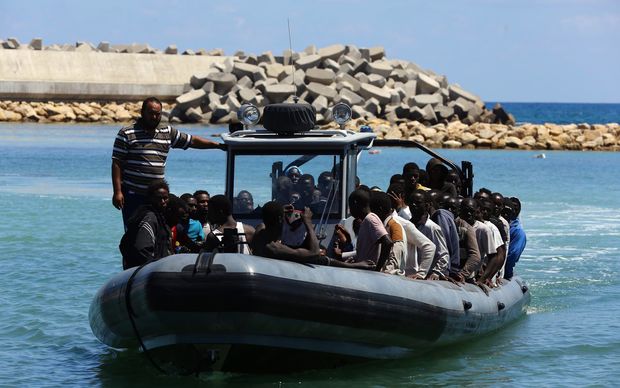 The aim is to launch the operation next month, with a headquarters in Rome under an Italian admiral, EU foreign policy chief Federica Mogherini said.

The EU is struggling to cope with a surge in illegal migrants from Africa and the Middle East crossing the Mediterranean Sea to reach Europe.

Ms Mogherini was speaking after talks with EU foreign and defence ministers.

The UK is playing the lead role at the UN Security Council in drafting a resolution that would give the EU a legal basis for using military force against people traffickers.

There would be three phases in the naval operation, the EU foreign policy chief explained:

Britain's Defence Secretary Michael Fallon said the plan was in the early stages, but the UK would help to develop it further.

"We are seconding some planning staff to think through the details of how it will work," he added.

"Any destruction of boats will require some legal authority and that has to come from the United Nations but we are not at that stage yet."

Ms Mogherini stressed that co-operation with officials in Libya, a country torn apart by feuding militias, would be vital to make the operation succeed.

The EU would have to work closely not only with the recognised government in Tobruk - represented at the UN - but also with rival officials in Tripoli and Misrata, to dismantle the smuggling networks, she told a news conference in Brussels. "The [Libyan] municipalities might have an important role to play," she said.

The Mediterranean mission will be led by Admiral Enrico Credendino, an Italian commander who ran the EU's anti-piracy mission off Somalia, Operation Atalanta.

Disrupting the people-smuggling networks is part of a wider EU plan for tackling the migration crisis. The European Commission has urged EU states to adopt national quotas for housing migrants, to ease the pressure on Italy, Greece and Malta.

The EU also aims to tighten co-operation with migrant transit countries in Africa, to make it easier to send economic migrants home. Too many irregular migrants with no right to asylum manage to stay in Europe, the Commission says.